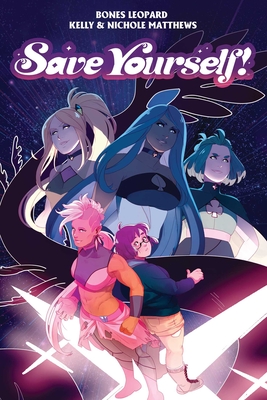 A magical new graphic novel from the team behind Pandora’s Legacy writer Bones Leopard (Identical) and artists Kelly & Nichole Matthews (Just Beyond), where the Magical Girls aren’t Earth’s champions at all.

Aoe, Thel, and Gen, better known as The Lovely Trio, first burst onto the scene five years ago when they saved Earth from a surprise space monster attack. As a result, everyone idolizes them as super-heroic pop icon magical girls, including Gigi, whose brother died as a bystander in one of their battles. But when Gigi witnesses the Lovely Trio battling a monster firsthand, she sees something that causes her to question everything she thought she ever knew about her heroes, and the “monsters” they fight, who may not be monsters are all! What she learns just might save the world, but only if she can survive the Lovely Trio herself in this magical new graphic novel from the team behind Pandora’s Legacy, writer Bones Leopard (Identical) and artists Kelly & Nichole Matthews (Just Beyond). Collects Save Yourself! #1-4.

Hello, a bit about me:

Bones Leopard is a twin and nonbinary writer and artist who currently resides in Los Angeles. Their projects include illustrating CLEAN UP from CCP Comics, twice successful Kickstarter project [SUPER]NATURAL ATTRACTION, and their webcomic MR. HARE & MR.BEAR.

In 2018 they successfully funded the kickstarter PANDORA'S BOOK OF MONSTERS which led to writing PANDORA'S LEGACY for BOOM! Studios.

Bones has experience from working on small personal projects to working with large teams on major licenses. They work hard to support their fluffy cat at home.