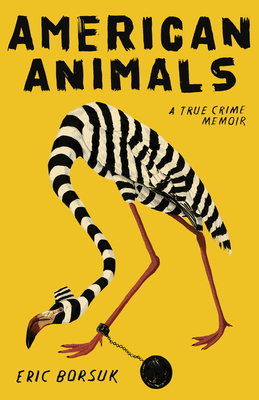 You ever go into a museum and ask yourself what would stop you from just taking something and walking right out the front door? Maybe, but you sure don't act on it (I hope). The kids in this true story did. Find out what happens when four college students carry out an art heist in this utterly fascinating true crime comedy of errors. And if you haven't seen the movie, do it. If you have, this pairs with it perfectly, offering a fresh new point of view.

AS SEEN IN THE MAJOR MOTION PICTURE

"One of the most esoteric and far-fetched crimes in 21st-century annals."
--The Hollywood Reporter

"A rare book heist that Danny Ocean may have applauded--except for one mistake."
--Vanity Fair

"A tragicomedy of errors."
--Salon

"They are the young people, the people with the idealism, the passion, the courage to do something interesting with their lives: an act of daring almost artistic in its originality. They are almost right."
--The Guardian

"One of the biggest art heists in FBI history."
--The Times of London

American Animals is a coming-of-age crime memoir centered around three childhood friends: Warren, Spencer, and Eric. Disillusioned with freshman year of college and determined to escape from their mundane Middle-American existences, the three hatch a plan to steal millions of dollars' worth of artwork and rare manuscripts from a university museum. The story that unfolds is a gripping adventure of teenage rebellion; from page-turning meetings with black-market art dealers in Amsterdam to the opulent galleries of Christie's auction house in Rockefeller Center. American Animals ushers the reader along a gut-wrenching ride of adolescent self-destruction. Providing a front-row seat to the inception, planning, and execution of the heist, while offering a rare glimpse into the evolution of a crime--all narrated by one of the perpetrators in a darkly comic, action-packed, true-crime caper.