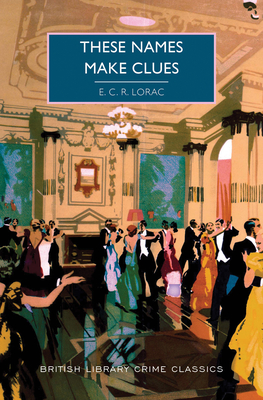 Amidst the confusion of too many fake names, clues, ciphers, and convoluted alibis, Chief Inspector Macdonald and his allies in the CID must unravel a truly tangled case in this metafictional masterpiece, which returns to print for the first time since its publication in 1937. This edition includes an introduction by CWA Diamond Dagger Award-winning author Martin Edwards.

"Should detectives go to parties? Was it consistent with the dignity of the Yard? The inspector tossed for it—and went."

Chief Inspector Macdonald has been invited to a treasure hunt party at the house of Graham Coombe, the celebrated publisher of Murder by Mesmerism. Despite a handful of misgivings, the inspector joins a guest list of novelists and thriller writers disguised on the night under literary pseudonyms. The fun comes to an abrupt end, however, when "Samuel Pepys" is found dead in the telephone room in bizarre circumstances.

E.C.R. LORAC was a pen name of Edith Caroline Rivett (1894-1958) who was a prolific writer of crime fiction from the 1930s to the 1950s, and a member of the prestigious Detection Club. Her books have been almost entirely neglected since her death, but deserve rediscovery as fine examples of classic British crime fiction in its golden age.

"Crime and punishment as the ultimate parlor game, aimed at readers who’ll keep its title front and center." — Kirkus Reviews

"First published in 1937, this superior entry in the British Library Crime Classics series from Lorac (1884–1959) is an exemplar of the golden age closed-circle whodunit.... Lorac plays scrupulously fair, but few will anticipate the denouement. Fans of clever puzzle mysteries will clamor for more Lorac reissues. " — Publishers Weekly, Starred Review