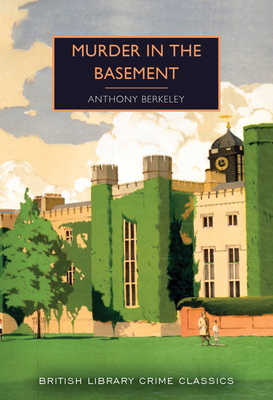 "[Anthony Berkeley's] tale of petty rivalries, affairs, and revenge plots is so deliciously entertaining. [Murder in the Basement is] a pioneering example of the "whowasdunin" that, like that corpse in the basement, richly deserves exhumation."— Kirkus Reviews

When two newlyweds discover that a corpse has been buried in the basement of their new home, a grueling case begins to trace the identity of the victim. With all avenues of investigation approaching exhaustion, a tenuous piece of evidence offers a chance for Chief Inspector Moresby and leads him to the amateur sleuth Roger Sheringham, who has recently been providing cover work in a school south of London.

Desperate for evidence of any kind in the basement case, Moresby begins to sift through the manuscript of a satirical novel Sheringham has been writing about his colleagues at the school, convinced that amongst the colorful cast of teachers hides the victim—and perhaps their murderer.

A novel pairing dark humor and intelligent detection work, this 1932 mystery is an example of a celebrated Golden Age author's most inventive work. This edition includes an introduction by CWA Diamond Dagger Award–winning author Martin Edwards.

ANTHONY BERKELEY was a pen name of Anthony Berkeley Cox (1893–1971), one of the most important figures in the history of British crime fiction. Many of his novels feature the amateur criminologist Roger Sheringham. As well as being the author of many classic detective stories--including Malice Aforethought under his Frances Iles pseudonym--Berkeley was the founder of the prestigious Detection Club for the finest crime writers.

"A newlywed’s hunch that a treasure is hidden in the Middlesex house he’s rented leads to an unwelcome discovery in this forgotten golden age gem first published in 1932. [Anthony Berkeley’s] tale of petty rivalries, affairs, and revenge plots is so deliciously entertaining. [Murder in the Basement is] a pioneering example of the “whowasdunin” that, like that corpse in the basement, richly deserves exhumation." — Kirkus Reviews

"First published in 1932, this stellar mystery from British author Berkeley (1893–1971) is believed to be the first-ever “whowasdunin...” Berkeley’s adroit use of dry humor and plot twists help to maintain suspense even before the dead woman is named. This entry more than exceeds the high standards of the British Library Crime Classics reprint series." — Publishers Weekly, Starred Review