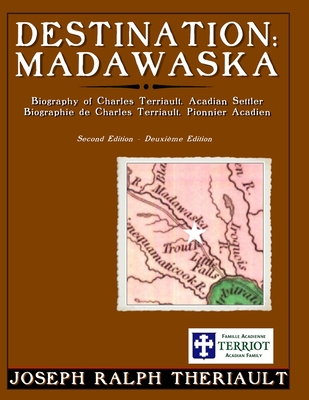 Written in French and in English, DESTINATION: MADAWASKA is the story of Charles Terriault, a settler of the Madawaska territory and a grandson of Joseph, an Acadian. Joseph was born in 1719 in Grand-Pr , Acadia, six years after the Treaty of Utrecht when France ceded Acadia to England. He grew up during the time when Acadia was anglicized into Nova Scotia and when Port Royal became Annapolis Royal. Although Joseph was able to avoid the catastrophic expulsion in 1755 of his neighbors from their farms, he eventually was forced to gather his wife and six children and flee by foot some 500 miles to St-Roch-des-Aulnies on the St Lawrence River in the colony of New France. Later, in 1823, his grandson Charles would migrate to the Madawaska territory in northern Maine and northwestern New Brunswick, to settle present-day St Jacques and transplant the Acadian culture there. 'DESTINATION: MADAWASKA' uses the story of Charles and his grandfather Joseph to present the history of Acadia and the Acadians. Charles was familiar with old Acadia from his uncles and aunts who were born there and lived there during their youth. Charles also experienced the trauma of the Acadians in exile in St Roch des Aulnies on the St Lawrence. By recounting the actual, first-hand experience of Joseph and his grandson, Charles, their day-to-day lives become vivid and understandable. After presenting a summary of the history of Acadia leading to the period of Charles' life which began in 1796, our story resumes with Charles and his new bride L ocadie preparing to migrate to the no-man's-land of the Madawaska territory. Eventually, their trek on the Madawaska River ends in present-day St-Jacques where they stake their claim and begin their new lives. We watch them as their family grows and we are witness to the tragedies of the period when young mothers without prenatal care lose their lives delivering their newborn. We see how families provide for each other in these early days of the settlement. 'DESTINATION: MADAWASKA' was written by Joseph Ralph Theriault, a native of Upper Frenchville, Maine and published by the Terriot Acadian Family Society of Harvard, Massachusetts.