My Brother: A Novel (Paperback) 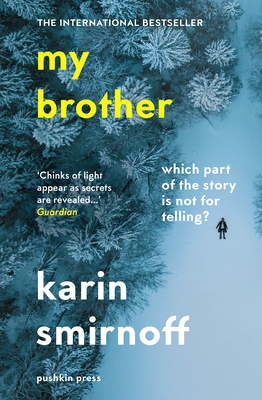 A Swedish publishing phenomenon: a literary noir of extraordinary power follows the discovery of a young woman’s body in the long grass behind the sawmill…

Which part of the story is not for telling?

Jana Kippo has returned to Smalånger to see her twin brother, Bror, still living in the small family farmhouse in the remote north of Sweden.

Within the isolated community, secrets and lies have grown silently, undisturbed for years.

Following the discovery of a young woman's body in the long grass behind the sawmill, the siblings, hooked by a childhood steeped in darkness, need to break free.

But the truth cannot be found in other people's stories. The question is: can it be found anywhere?

Karin Smirnoff lives in Hertsånger, Sweden. She worked as a journalist before quitting her job to buy a wood factory. After a couple of years, she wrote her debut novel, My Brother, which was discovered on the slush pile. It became a critically acclaimed bestseller and has since been shortlisted for the prestigious August Prize, translated into eleven languages, and optioned for TV by the producers behind The Bridge.

Dr Anna Paterson used to work as a neuroscientist and is now a writer and an award-winning translator from Swedish, Norwegian, Danish, and German into English. Her own recent writing has focused on the relationship between literature and environmental issues.

"Original and fascinating, the best debut I’ve read from a Swedish writer in years"
--MARTIN HOLMÉN, AUTHOR OF THE STOCKHOLM TRILOGY

"From the start, there is an energy in the writing of this novel that only occasionally lets up… unfolding mysteries with miseries"
--IRISH TIMES

"My Brother is perfect for fans of Scandi-noir dramas"
--CULTUREFLY

"An exposition on human frailty and resilience, and on despair and hope… Darkly poetic"
--EUROPEAN LITERATURE NETWORK

"Every now and then there are debut novels that appear like crown jewels… My Brother belongs there: clever, detailed and shimmering"
--SVENSKA DAGBLADET

"Secrets and lies grow thick and tall like tree trunks… [My Brother] has its own logic and its own hard, coarse beauty"
--SMÅLANDPOSTEN