The Good State: On the Principles of Democracy (Paperback) 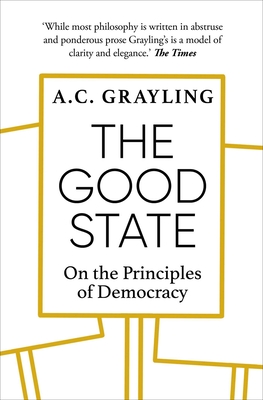 As democracy shows signs of decay, how do we not only arrest its decline but build something better – a state which is democratic in the fullest sense?

The foundations upon which our democracies stand are inherently flawed, vulnerable to corrosion from within. What is the remedy?

A. C. Grayling makes the case for a clear, consistent, principled and written constitution, and sets out the reforms necessary – among them addressing the imbalance of power between government and Parliament, imposing fixed terms for MPs, introducing proportional representation and lowering the voting age to 16 (the age at which you can marry, gamble, join the army and must pay taxes if you work) – to ensure the intentions of such a constitution could not be subverted or ignored. As democracies around the world show signs of decay, the issue of what makes a good state, one that is democratic in the fullest sense of the word, could not be more important.

To take just one example: by the simplest of measures, neither Britain nor the United States can claim to be truly democratic. The most basic tenet of democracy is that no voice be louder than any other. Yet in our ‘first past the post’ electoral systems a voter supporting a losing candidate is unrepresented, his or her voice unequal to one supporting a winning candidate, who frequently does not gain a majority of the votes cast. This is just one of a number of problems, all of them showing that democratic reform is a necessity in our contemporary world.

A. C. Grayling is the Founder and Principal of the New College of the Humanities at Northeastern University, London, and its Professor of Philosophy. Among his many books are The God Argument, Democracy and Its Crisis, The History of Philosophy, The Good State and The Frontiers of Knowledge. He has been a regular contributor to The Times, Guardian, Financial Times, Independent on Sunday, Economist, New Statesman, Prospect and New European. He appears frequently on radio and TV, including Newsnight and CNN News. He lives in London.

‘A brilliant exploration of democracy as it is and as it should be.’
— Kirkus