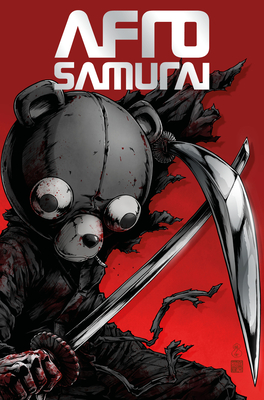 Volume 2 of the brand new “director’s cut” edition of the classic manga sees Afro continue his quest for revenge. With a specially commissioned cover and unseen content by creator Takashi Okazaki, this is a must have for fans of cult manga and anime!

Japan has become a land of warriors, warlords and assassins, where the technology of the future exits alongside the brutal traditions of the past. This world is ruled by whoever possesses the legendary No.1 headband.

When the boy Afro Samurai’s father, Rokutaro, is challenged as No.1 and killed by the No.2, a lethal outlaw known as Justice, he swears revenge, starting on a bloody path of retribution that will make him the No.2 warrior and allow him to challenge Justice.

After having defeated the Empty Seven Clan, Afro is forced to face a new threat: a deadly warrior who wears a teddy mask called Jinno. Will his bloodthirsty campaign of vengeance be thwarted, or will he finally face Justice and claim the number one headband?

Takashi Okazaki is a Japanese manga writer and artist, and visual designer most well-known for creating Afro Samurai. He has also created character designs for many other games and anime, including Batman Ninja. Most recently, he has worked as a cover artist for Marvel Comics on titles including Werewolf by Night, Black Widow and Deadpool.

"For fans of the genre, the raw, largely unpandering violence is impressive." - Ain't It Cool