Chip War: The Fight for the World's Most Critical Technology (Compact Disc) 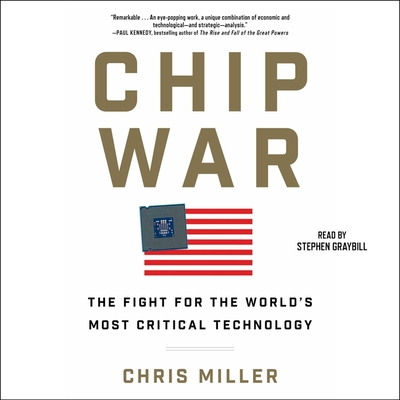 An epic account of the decades-long battle to control what has emerged as the world's most critical resource--microchip technology--with the United States and China increasingly in conflict.You may be surprised to learn that microchips are the new oil--the scarce resource on which the modern world depends. Today, military, economic, and geopolitical power are built on a foundation of computer chips. Virtually everything--from missiles to microwaves--runs on chips, including cars, smartphones, the stock market, even the electric grid. Until recently, America designed and built the fastest chips and maintained its lead as the #1 superpower, but America's edge is in danger of slipping, undermined by players in Taiwan, Korea, and Europe taking over manufacturing. Now, as Chip War reveals, China, which spends more on chips than any other product, is pouring billions into a chip-building initiative to catch up to the US. At stake is America's military superiority and economic prosperity. Economic historian Chris Miller explains how the technology works and why it's so important, recounting the fascinating events that led to the United States perfecting the chip design, and to America's victory in the Cold War by using faster chips to render the Soviet Union's arsenal of precision-guided weapons obsolete. But lately, America has let key components of the chip-building process slip out of its grasp, leading to a worldwide chip shortage and a new war brewing with a superpower adversary that is desperate to bridge the gap. Illuminating, timely, and fascinating, Chip War shows that, to make sense of the current state of politics, economics, and technology, we must first understand the vital role played by chips.