A Singular Man: A Documented Life of the Artist Frederick Sandys: 1829–1904 (Hardcover) 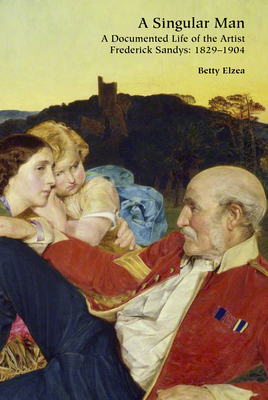 Born and educated in Norwich with an artisan background, Sandys was bohemian by nature, though from necessity, to the world at large, he appeared genteel and respectable. Unfortunately disorganised, un-businesslike and preferring to live alone as a bachelor in lodgings, he struggled to support two growing families of illegitimate children.

From youth, developing skills as a draughtsman and painter, he moved to London, meeting Dante Gabriel Rossetti and the Pre-Raphaelites and their associates, while keeping a foothold in Norwich where he maintained friendships and enjoyed the support of the Norfolk gentry and several notable Norwich industrialists.

Norfolk landscape painting and nature studies led to commissioned portraiture which became his main source of income. He is known for depictions of beautiful women in legendary disguises as well as meticulously-detailed portraits of elderly women. He also pioneered a new type of large-scale portrait drawing in chalks

Born in Delhi, Betty Elzea studied at Chelsea School of Art and took courses in the history of art at the University of London before joining the staff of the Victoria and Albert Museum in 1956, and Brighton Museum in 1970. Between 1974 and 1990 she was employed part-time at the Delaware Museum and the Philadelphia Museum of Art. She returned to the UK and her catalogue raisonné of Sandys’s work was published in 2001, the year that the Castle Museum, Norwich, put on a major Sandys exhibition to support its publication. In retirement, Betty completed her biography of the artist, helped and encouraged by Sandys’s grandson, the late Anthony Crane, who gave her access to the family archive which she has since inherited and bequeathed to the Victoria and Albert Museum.