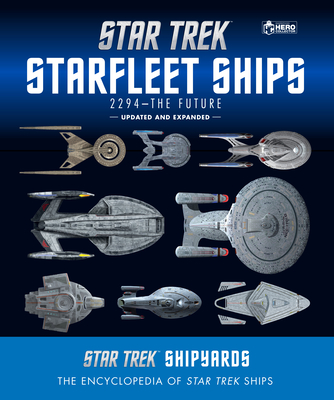 Starships from Picard and Discovery beam into this eagerly awaited UPDATED 2nd edition. In fact, there are 70 pages of all-new, never-seen images and information!


The future of Star Trek is now… your hands, as Hero Collector presents the latest chapter in the ever-evolving chronological history of the franchise’s Starfleet starships, spanning from the 24th Century to the far future. Fans of Star Trek – celebrating its 55th anniversary – can us this reference book to take deep dives into the U.S.S. Enterprise NCC-1701-D, U.S.S. Voyager, U.S.S. Defiant, and time-traveling ships from the distant future, as well as the La Sirena and Book’s scout ship.

All the featured ships are illustrated with CG artwork, including VFX models produced for the shows.

Ben Robinson has been involved with Star Trek for 20 years. Ben was the launch editor of the huge Star Trek Fact Files, went on to edit the US Star Trek: The Magazine, which ran between 1999 and 2003. He has co-written two Haynes Manuals, the first featuring all seven Enterprises, and the second focusing on the Klingon bird-of-prey. Ben created the Starfleet shipyards line of books and co-authored Star Trek Voyager: A Celebration.

From the inside flap:


STAR TREK SHIPYARDS is a series of lavishly illustrated books that provide in-universe profiles of STAR TREK ships, building into the ultimate illustrated encyclopedia of STAR TREK vessels. Each ship is profiled with technical information, operational history and plan view CG renders – wherever possible using the original VFX models that were used on the TV shows and movies.

STAR TREK SHIPYARDS: STARFLEET SHIPS 2294–THE FUTURE
This volume features small transports, fighters, multi-mission explorers and time traveling ships from the distant future. Each ship is illustrated with CG artwork, including original VFX models made for the TV show, alongside a technical overview and operational history. Chapters include size charts, showing the ships to scale. An appendix of class listings is featured at the back of the book.