Cathedral: An Illness and a Healing (Hardcover) 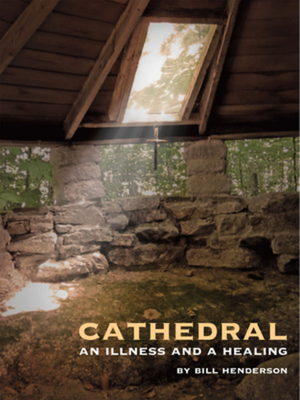 By Bill Henderson
$22.00
It's Complicated--Contact Us for More Information

I am not a Christian let alone do I believe (or even care) whether a God exists or not. But like Bill Henderson, I do believe there are sacred places in this world and the Blue Hill Peninsula is among them.This book chronicles Bill’s construction by hand of a “cathedral” on his land built with local stone over a period of years during which he also is diagnosed, then battles a life-threatening cancer. The spirit of the place and the people who dwell there help to make this memoir both moving and memorable.

— From Cathedral: An Illness and a Healing

“This is the story about an aging man who builds a holy place in his backyard. It involves bugs, lousy weather, cancer and spiritual waverings.”

Thus begins Bill Henderson’s Cathedral: An Illness and a Healing, a memoir about cancer and construction.

On the face of it Cathedral is most akin to Henderson’s Tower: Faith, Vertigo and Amateur Construction (FSG), a Thoreau-esque chronicle of building a tall structure on the grounds of his hilltop property in Maine. But Cathedral is more overtly a spiritual memoir like his Simple Gifts: One Man’s Search for Grace (S&S), a tribute to the pleasures of singing hymns.

Like all his books, Cathedral is equal parts wisdom, self-deprecation, laughs, aching honesty, and inspiration. And, like his cathedral itself, it is lovingly constructed.

Bill Henderson is the founder and editor of the Pushcart Prize. He received the 2006 National Book Critic Circle’s Lifetime Achievement Award and the Poets & Writers / Barnes & Noble Writers for Writers Award. He is also the author of several memoirs, including All My Dogs: A Life. The founder of the Lead Pencil Club, Henderson lives on Long Island and In Maine where he runs the Pushcart bookstore – “the world’s smallest bookstore.”

Pushcart Prize editor Bill Henderson has written a tale of faith and survival, a fascinating history of cathedral building, life in a small town in Maine and the struggle against cancer and the "pride" of despair. But most moving is that of a man's faith in love and family and the regeneration hope brings. It's a memorable and inspiring book.
— Philip Schultz, Pulitzer Prize winning author of My Dylexia and The Wherewithal

A pithy, poignant chronicle about the abbeys we build in duress and inspiration.
— Edward Hoagland