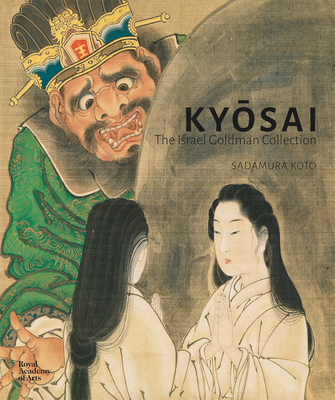 The Japanese artist Kawanabe Kyosai (1831-89) was celebrated for his exciting impromptu painting performances at calligraphy and painting parties. Described by British scholar Timothy Clark as "an individualist and an independent, perhaps the last virtuoso in traditional Japanese painting, Kyosai saw Japan transform itself from a feudal country into a modern state. The politically turbulent times in which he lived are reflected in his riotous images, in which skeletons, demons and ghosts rub shoulders with classically rendered ukiyo-e courtesans.
Among his most charming and inventive works are his brilliant depictions of animals--crows, frogs and elephants, among many others--which often stand in for political figures of the day. Overlooked for decades, particularly compared to his earlier counterparts Hokusai and Hiroshige, Kyosai is now celebrated for his ability to bridge popular culture and traditional art. His important place in the art of Japan is here explored in depth by Koto Sadamura, a leading authority on the artist, in this catalog of the exceptionally rich holdings of the Israel Goldman Collection, one of the finest Kyosai collections in the world.