How to Teach Grown-Ups about Pluto: The Cutting-Edge Space Science of the Solar System (Hardcover) 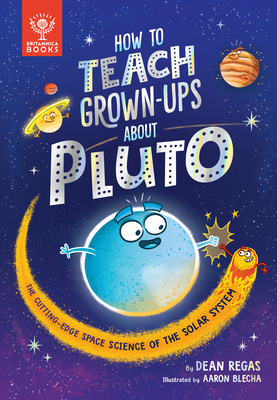 I was ten years old when Pluto was officially "demoted" - declared not a planet, but a dwarf planet. Being ten and a fan of underdogs, I was understandably offended on Pluto's behalf. But it's been almost twenty years since then, and some grown-ups still haven't gotten over it! This book addresses the history of Pluto, and also the way grown-ups hold onto ideas about the world even when our scientific understanding changes. One half of Piera's October "Science Sure Does Change!" Special.

— From How To Teach Grown-Ups About Pluto

A witty guide to Pluto's discovery and demotion, which puts kids in charge.

Pluto has not been a planet since 2006. But this tiny world still inspires people of all ages while sparking controversy. In this delightfully witty book, astronomer Dean Regas teaches you how to educate your grown-up about the cutting-edge science of space, most crucially the reason why Pluto is NOT a planet anymore. Delving into the history of space discoveries, the key players who have helped our understanding of the universe (including the 11-year-old girl who named Pluto in the first place), and the ever-changing nature of science, this book will equip every reader with the tools they need to bring their grown-ups fully up to speed, and to sneak in as many amazing astronomical facts as possible. And there's a handy quiz at the end so that you can check your grown-up has been paying attention

Dean Regas is the Astronomer at Cincinnati Observatory, responsible for science outreach activities, and a national popularizer of astronomy. He is the author of several books including Facts from Space! and was the co-host of the prolific PBS show Star Gazers. An extremely engaging and media-savvy astronomy lecturer, he has served as the Observatory's Outreach Astronomer since 2000 and is one of NASA's Solar System Ambassadors, responsible for sharing its latest science and discoveries. An accomplished educator, Dean is an expert in observational astronomy and is a Contributing Editor to Sky & Telescope magazine, where he won the "Out-of-this-World Award" for astronomy education.Aaron Blecha is an artist and author based in Brighton, UK, who designs funny characters and illustrates humorous books. Aaron has illustrated over 40 books, including the popular George Brown, Class Clown, and Shark School series. He is also the author and illustrator of Goodnight, Grizzle Grump! and Good Morning, Grizzle Grump! published by HarperCollins. In addition to illustrating children's books, Aaron works as a character designer in TV development for studios such as Disney, Curious Pictures, and eOne Family.Britannica Group is a global education leader with over 250 years of dedication to seeking out facts and providing insight into the mysteries of the universe. Britannica's mission to inspire curiosity and the joy of learning helps build the world's future thinkers and innovators.