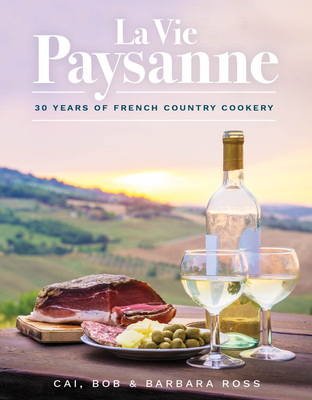 Paysanne opened its doors in 1988 to what has since been described as ‘a roar of apathy’. Bob & Barbara Ross had spent the previous four years running a pub in the heart of North Wales and having tired of sending out frozen lemon meringue pies and chicken in a basket (this was the 1980s!) they wanted to up their game and put into practice all the marvellous creations Barbara had been reading about in Elizabeth David books since the ‘60s.

This book tells the epic story of Paysanne’s three-decade stint through a scrapbook/family album of images, newspaper clippings and mementos; through tales of evenings going spectacularly wrong and of heroically-snatched victories. It showcases the classic recipes that have been stalwarts for all these years, and also the latest staples that Bob & Barbara have picked up in the Languedoc since moving out there in 2003.

Classics like Cassoulet and our wonderful Bouillabaisse-style fish soup with rouille and grated Gruyere cheese are mixed in with new dishes like escargots served in a dish made of toasted baguette soaked in garlic butter. Slightly tricky experiments like baked apples stuffed with black pudding are undercut by childishly simple fare like potted shrimps in nutmeg butter.

All of Barbara’s tried and tested recipes are accompanied by Bob’s witty commentary, as though delivered over her shoulder as she cooks – very off putting!

In these tall tales, there is a warm humour that is often absent in modern cook books that often seem to forget that cooking is supposed to be a pleasure and not an exam in which only perfection will be tolerated. The recipes have been written with simplicity in mind, encouraging the reader not to panic and to enjoy the process, not fear it.

A lifelong cinema devotee, Cai had hoped to break into the film business as a scriptwriter, having studied the craft at university. After initial successes, selling a script and co-writing a BBC Radio Wales sit-com, the well ran unexpectedly dry. As a stop-gap that was only supposed to last six months, he took over the running of Paysanne in 2003, when his parents retired to the south of France. ‘Life is what happens to you while you’re busy making other plans’ is a lyric that springs to mind, since he is still there today running it with the head chef.

Life as a restaurateur has enabled Cai to indulge in his love of food, often to marvellous excess. Over the past decade he has been feeding his writer hunger by penning articles about food and films for, among others, Cinema Retro magazine, Calibre Quarterly, HeyUGuys.com and BBC Good Food.

Cai is married to Melissa and they have two delightful children. He has yet to overcome his distaste for writing about himself in the third person.

These days the term ‘Tomboy’ can elicit howls of righteous indignation from some quarters, but that is exactly what Barbara was as a youngster. She was a Boadicea on the Lacrosse field and was doted upon by her father, Dr Ben Carr, an utterly lovely man. She had ponies from an early age, becoming a competitive and fearless rider. In her later teens she discovered Go Kart racing and with Ben as her mechanic and chauffeur, she became British Ladies Champion.

She left school as soon as she could, studied at Chester Art College and did a stint at the Cheshire Planning Department. She also became a veterinary assistant at Chester Zoo. All these skills proved vital later on, both in building work and on our farm. After all, when you’ve extracted a tooth from a bear, you’re not going to be fazed by a few sheep, are you?

Barbara’s mother presided over a burns unit rather than a kitchen (to steal a line from Bill Bryson) so becoming a good cook was a simple necessity but she discovered a natural talent which enabled her to take over a kitchen at our pub, The Goat and later Paysanne, where she stepped it up a gear. Supposedly retired in France now, she has still never had a cookery lesson.

Born in North Wales, Bob spent his childhood in Llangollen where he miraculously qualified for grammar school at Chester. He was more interested in playing the double bass in jazz clubs than in learning anything and embarked on a series of dead-end jobs before marrying Barbara in 1968. With her help and support he became an enthusiastic restorer of old rural properties, notably the hill farm near Ruthin where sons Cai and Tobi were born and raised. Bob and Barbara then bought the derelict Goat back from the dead, before opening Paysanne in 1988.

Bob never stopped playing double bass and throughout the 1970s and early ‘80s, he played with The Merseysippi Jazz Band, doing four tours in California and recording three albums. He was also a thuggish rugby forward at local club level, whose less than mesmeric record of three tries in twelve years speaks for itself.

In 2003, Bob and Barbara moved to the French Midi region where he still plays with buildings, eats and drinks too much.