Barty: Much More Than Tennis (Paperback) 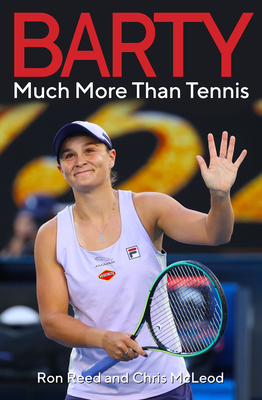 Of all the uplifting sports stories that have captured the world’s imagination, few have been greeted with such spontaneous and unanimous acclaim as tennis champion Ashleigh Barty.

This book covers her journey from a knockabout kid from QueenslandAustralia to Wimbledon Champion and World No. 1 player and explores her rare gift for the game, engaging personality, innate modesty and relentless determination
to be the best.

Barty’s mantra is that being a good human being is far more important than being a good tennis player, and it has been widely hailed as a lesson for all. In other words, she now transcends sport. Her unfolding, unfinished narrative has come to resonate with overtones of national pride and inspiration, community morale, cultural issues ancient and modern, the importance of family and friends, the regard for humility and grace over rampant ambition, the escalating battle for gender equality, and perspectives on fame and fortune.

In this new edition of the top seller, award-winning sports writer Ron Reed and journalist Chris McLeod pay tribute to the World No. 1 covering all her games and unforgettable moments.

Ron Reeds 50-plus years in sports journalism include decades as a columnist and feature writer for Australia' biggest-selling daily newspaper, the Herald Sun, and one as Editor of the old Sporting Globe. His work has earned many awards and accolades, including Australian sportswriter of the year and a lifetime achievement award from Sport Australia, formerly the Australian Sports Commission. He has covered most of the worlds major sports events in more than 30 countries, and is a tennis aficionado, having been a fixture at the Australian Open as well as many Davis Cup ties. Chris McLeod is a former newspaper journalist and executive. He is an author and researcher for floggerblogger.com with an interest in sport, transport and mystery. His bookazines include World’s Best Golf Courses, World’s Best Trains, Elite Special Forces and Unsolved – terror crimes and accidents.