A Day in the Life of Ancient Rome: Daily Life, Mysteries, and Curiosities (Paperback) 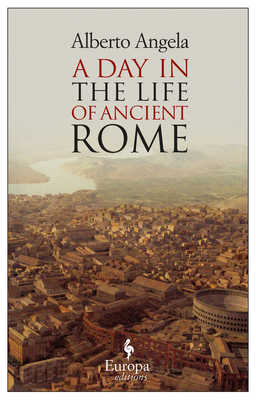 By Alberto Angela, Gregory Conti (Translated by)
Not Available
Out of Print

Great pleasure for the history buff or curious general reader.  Angela picks a specific day at the height of the Roman Empire and follows various typical Romans through their day, illustrating how they dress, eat, etc.  Angela's easy conversational style belies what must be copious research.

— From A Day in the Life of Ancient Rome

The wondrous extravagance of banquets where flamingos are roasted whole and wine flows like rivers. The roar of frenzied spectators inside the Colosseum during a battle between gladiators. A crowd of onlookers gathered at a slave auction. The silent baths and the boisterous taverns...Many books have dealt with the history of ancient Rome, but none has been able to so engage its readers in the daily life of the Imperial capital.

This extraordinary armchair tour, guided by Alberto Angela with the charm of a born storyteller, lasts twenty-four hours, beginning at dawn on an ordinary day in the year 115 CE, with Imperial Rome at the height of its power. The reader wakes in a rich patrician home and discovers frescoes, opulent furnishings and richly appointed boudoirs. Strolling though the splendors of the Roman Forum, one overhears both erudite opinions from learned orators and local ribaldry floating out from the public latrines. One meets the intense gazes of Roman matriarchs strolling the streets, looks on as a banquet is prepared, and is afforded a peek into the sexual habits and fetishes of Roman patricians and plebs. For all those who have ever dreamed of traveling back in time, Alberto Angela's narrative style will prove thoroughly satisfying. Rich in atmosphere and historical information, A Day in the Life of Ancient Rome is a voyage into a world both distant to us in time and surprisingly near in its habits, mores, and passions.

Alberto Angela hosts two of Italy's most popular science television programs, Superquake and Ulisse. He is the author of Life-sized Museums (1988) and, with his father Piero Angela, The Extraordinary Story of a Growing Life (1996), Sharks (1997), and Voyage in the Cosmos (1998).

Gregory Conti teaches at the University of Perugia and the University of Rochester. His published translations include works by Rosetta Loy, Mario Rigoni Stern, and Tiziano Scarpa. Most recently, he translated Capital and Language by Christian Marazzi and The Templars by Barbara Frale.

Praise for A Day in the Life of Ancient Rome

"Alberto Angela makes an important but often complicated subject fascinating and accessible. The reader is catapulted into a day in the Imperial capital and uncovers affinities, secrets, curiosities, and anecdotes about the inhabitants of ancient Rome . . . Angela transforms his book into a kind of three-dimensional set in which the reader strolls, visiting homes, markets, open air school, baths, and even public latrines."
—Il Giornale

"One discovers a wealth of details about the curious habits of ancient Romans, from their recipes to their tastes in interior design, from life in the Insulae, the giant Roman housing projects, to the shocking slave markets."
—Il Corriere della Sera

"A Day in the Life of Ancient Rome feels like a cinematic tour through the apartments and streets of ancient Rome. [The book] is an excellent introduction to the daily life of Roman, likely to inspire further interest in Roman history for the reader."
—Bookslut

"In this scrupulous portrait of ancient Rome, Alberto Angela breathes life into history's intimate aspects, paying homage to that history made not by great figures but by individuals, those citizens of Rome whose daily habits and energies contributed to the grandeur and power of the Roman Empire."
—Agora Magazine

“A Day in the Life of Ancient Rome produces a remarkably illustrative overview of how Romans of that time lived. Angela has succeeded at delivering a large quantity of information with an affable, inviting style.”
—Kristin Merrihew, MostlyFiciton Book Reviews

"Reading this book is like being with a tour guide who has taken you back in time, and is giving you a day’s guided tour of 115 CE Rome.”
—EmmabBooks

“This is a wonderful book for lovers of history and novices alike.”
—History and other Thoughts