Dearer Than Life: A Story of the Times of Wycliffe (Hardcover) 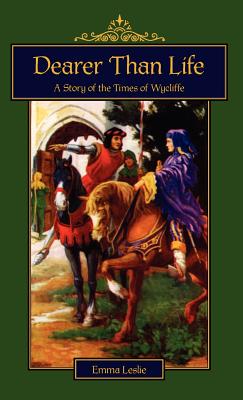 Arriving home in A.D. 1366 from a meeting of Parliament in London, Sir Hugh Middleton is shocked to learn from his daughter that a neighboring monastery has laid claim to one of his fields. When Sir Hugh drives the monks from his property, his brother, a monk at the monastery, tells him that he has committed a mortal sin, however Sir Hugh steadfastly refuses to yield. He further offends the monastery by sending his younger son, Stephen, to study under Dr. John Wycliffe, who has begun to publicly question the authority of the Church to grant pardon for sin. At the same time, Sir Hugh sends his elder son, Harry, to serve as an attendant to the powerful Duke of Lancaster, who is well-known for his desire to limit the power of the Church and increase the power of the nobility. These are times of great political and religious upheaval as the desire for freedom spreads throughout England and Europe. As Wycliffe's "poor priests" begin to share the Word of God with the common people, Stephen and Harry and their sisters, Maud and Madge, all find that they have parts to play for the kingdom of God in the turbulent day in which they live.