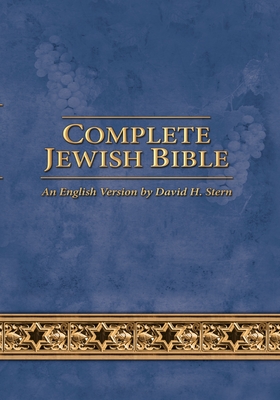 Now, the most widely used Messianic Jewish Bible around the world, has updated text with introductions added to each book, written from a biblically Jewish perspective. The CJB is a unified Jewish book, a version for Jews and non-Jews alike; to connect Jews with the Jewishness of the Messiah, and non-Jews with their Jewish roots. Names and terms are returned to their original Hebrew and presented in easy-to-understand transliterations, enabling the reader to say them the way Yeshua (Jesus.

David H. Stern, born in Los Angeles in 1935, is the great-grandson of two of the city's first twenty Jews. He earned a Ph.D. in economics at Princeton University and was a professor at UCLA. In 1972 he came to faith in Yeshua the Messiah. He then received a Master of Divinity degree at Fuller Theological Seminary, did graduate work at the University of Judaism, and was active in the Messianic Jewish movement. In 1979 the Stern family made aliyah (immigrated to Israel); they now live in Jerusalem. Dr. Stern authored the Messianic Jewish Manifesto from which Restoring the Jewishness of the Gospel is excerpted. His highly acclaimed English translation, the Jewish New Testament, restores the New Testament's Jewishness. His Jewish New Testament Commentary discusses the many Jewish issues found in the New Testament. His fresh translation, the Complete Jewish Bible, expresses the unity of the Tanakh (Old Testament) and the B'rit Hadashah (New Testament). This outstanding, scholarly work offers Bible readers a thorough, biblically Jewish version of God's word.