Althea Gibson: I Always Wanted To Be Somebody (Paperback) 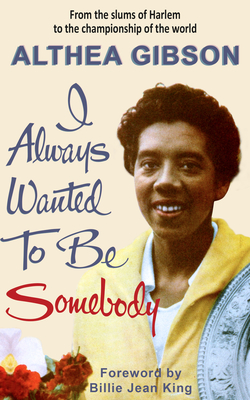 I Always Wanted To Be Somebody is the intimate and candid story of a girl who grew up in the asphalt environs of Harlem, skipping school, drinking hard liquor, stealing and fist-fighting, but went on to break the color barrier in tennis and achieving the pinnacle of the sport by winning Wimbledon and the U.S. Open and becoming an inspiration for many future champions such as Billie Jean King, Arthur Ashe, Venus Williams, and Serena Williams, among many others.

Althea Gibson is one of the most iconic and talented female athletes of all time, breaking the color barrier in tennis and becoming the first black player to play and win at Wimbledon and the U.S. Championships. After becoming the first black player to participate in the U.S. Championships (the modern-day U.S. Open) in 1950 (three years after Jackie Robinson integrated baseball), she won the first of her back-to-back titles there in 1957, also winning singles titles at Wimbledon in 1957 and 1958. After her tennis career, she also became the first black person on the LPGA Tour in golf. She was inducted into the International Tennis Hall of Fame in 1971 and died in 2003. Athlete, coach, leader, activist, and one of the most illustrious and celebrated tennis players in history, Billie Jean King is recognized for her life-long struggle for gender equality, both on and off the court. Life magazine named King one of the "100 Most Important Americans of the 20th Century," and she is ranked No. 5 on the Sports Illustrated "Top 40 Athletes." Billie Jean King is the first female athlete to receive the Presidential Medal of Freedom. She is the founder of the Billie Jean King Leadership Initiative, the Women's Tennis Association, and the Women's Sports Foundation; she co-founded World Team Tennis; and she is part of the ownership group of the Los Angeles Dodgers. In 2006, the National Tennis Center was renamed the USTA Billie Jean King National Tennis Center. In 2020, the Fed Cup was renamed the Billie Jean King Cup, making it the first global team sports competition named for a woman. She is six-time Wimbledon singles champion.

"This absorbing story of Althea Gibson's rise from the streets of Harlem to acceptance in the highest social circles, bearing the authentic stamp of herself on every page, might be judged a valuable social document." —New York Times

"The candid story of a crude, brassy tomboy who rose from the streets of Harlem to become a lady like queen of the tennis courts" —Seventeen Magazine


"Althea Gibson, queen of tennis, has a true Cinderella story to tell and she does it well" —Stars and Stripes

"There are pathos, humor and great perceptiveness in Miss Gibson's book." —Pittsburgh Courier


"It isn't pretty but it is honest and frank and intimate and very much worth reading." —Quentin Reynolds, Saturday Review

"A frank and modest story of one of America's finest women athletes. " —Worcester Sunday Telegram