The Art of Flight (Paperback) 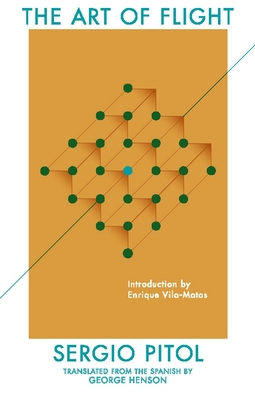 A meditation on travel, literature, writing, politics and culture, The Art of Flight is the long overdue introduction of one of the great living Mexican writers to American readers. Part memoir, part travelogue, part something else, this book is a must for writers and others interested in creativity or thoughtful considerations of ways of being. Also great for fans of The Empathy Exams, The Argonauts, and, oddly, Knaussgaard's My Struggle.

— From THE ART OF FLIGHT

Pitol is unfathomable; it could almost be said that he is a literature entire of himself. -- Daniel Salda a Paris, author of Among Strange Victims

The debut work in English by Mexico's greatest and most influential living author and winner of the Cervantes Prize (the Spanish language Nobel), The Art of Flight takes the reader on a whirlwind tour of the world's cultural capitals as Sergio Pitol looks back on his well-traveled life as a legendary author, translator, scholar, and diplomat.

The first work in Pitol's Trilogy of Memory, The Art of Flight imaginatively blends the genres of fiction and memoir in a Borgesian swirl of contemplation and mystery, expanding our understanding and appreciation of what literature can be and what it can do.

Sergio Pitol Demeneghi (b. 1933 in Puebla), one of Mexico's most acclaimed writers and literary translators, studied law and philosophy in Mexico City, and served for over thirty years as a cultural attach in Mexican embassies and consulates across the globe, which is reflected in his diverse and universal writing. In recognition of the importance of his entire canon of literary work, Pitol was awarded the Juan Rulfo Prize in 1999 (now known as the FIL Literary Award in Romance Languages), and in 2005 the Cervantes Prize, the most prestigious literary prize in the Spanish language world.

George Henson is a literary translator and assistant professor of translation at the Middlebury Institute of International Studies in Monterey. His translations include Cervantes Prize laureate Sergio Pitol's Trilogy of Memory, The Heart of the Artichoke by fellow Cervantes recipient Elena Poniatowska, and Luis Jorge Boone's Cannibal Nights. His translations have appeared variously in The Paris Review, The Literary Review, , BOMB, The Guardian, Asymptote, and Flash Fiction International. In addition, he is a contributing editor for World Literature Today and the translation editor for its sister publication Latin American Literature Today.

Sergio Pitol Demeneghi is one of Mexico's most acclaimed writers, born in the city of Puebla in 1933. He studied law and philosophy in Mexico City. He is renowned for his intellectual career in both the field of literary creation and translation, and is renowned for his work in the promotion of Mexican culture abroad, which he achieved during his long service as a cultural attache in Mexican embassies and consulates across the globe. He has lived perpetually on the run: he was a student in Rome, a translator in Beijing and Barcelona, a university professor in Xalapa and Bristol, and a diplomat in Warsaw, Budapest, Paris, Moscow and Prague. Pitol is a contemporary of the most famous authors of the Latin American "Boom," and began publishing novels, stories, criticism, and translations in the 1960s. In recognition of the importance of his entire canon of work, Pitol was awarded the two most important prizes in the Spanish language world: the Juan Rulfo Prize in 1999 (now known as the FIL Literary Award in Romance Languages), and in 2005 he won the Cervantes Prize, the most prestigious literary prize in the Spanish language world, often called the "Spanish language Nobel." Deep Vellum will publish Pitol's Trilogy of Memory in full in 2014-2015 (The Art of Flight; The Journey; The Magician of Vienna), marking the first appearance of any of Pitol's books in English.

George Henson is currently completing a PhD in Humanities (with an emphasis on literary and translation studies) at the University of Texas at Dallas. He received his BA from University of Oklahoma, and his MA from Middlebury College. From 2003 to 2010, Mr. Henson taught Spanish language, literature, and translation at Southern Methodist University. He has also taught Spanish language and literature courses at the University of Texas at Arlington and the University of North Texas. Prior to teaching at SMU, Mr. Henson taught for six years at Collin College in Plano. Henson's primary scholarly interests lie in literary translation and translation theory. His translations of short stories by Mexican author Elena Poniatowska have appeared in Nimrod, Translation Review, The Literary Review, and Puerto del Sol. His translation of Carlos Pintado's short story "Joy Eslava" was published by Zafra Lit, and his translations of poems by Francisco Moran have appeared in Sojourn and are forthcoming in The Havana Reader (Duke University Press). Mr. Henson's translation of Elena Poniatowska's short story collection Tlapaleria will be published in 2011 by Alligator Press. His current projects include translating short story collections by Mexican writer Luis Jorge Boone and Spanish writer Andres Neuman. Henson has been invited to read papers on topics related to literary translation and queer literature at conferences hosted by the American Comparative Literature Association, New York University, and Emory University.