Homeland Security Ate My Speech: Messages from the End of the World (Hardcover) 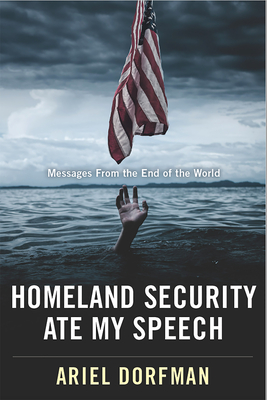 By Ariel Dorfman
Not Available
Available to Order from Supplier: Arrives at Store in a Week(ish)

A great collection of essays and speeches from a Chilean-American writer. (Bonus points for the title piece, a satire that was so on-the-nose he had to add a disclaimer.)

— From Homeland Security Ate My Speech

A worthy addition to the library of resistance. --Kirkus Dorfman's critique is personal, intellectual, devastating, and at times bitingly funny. --New York Journal of Books Combining elements of memoir, political theory, and literary criticism, Ariel Dorfman's Homeland Security Ate My Speech is an emotionally raw yet measured assessment of the United States after the election of Donald Trump. Dorfman, writing with a bifurcated Latino-American identity, highlights the troubling parallels between Trump and repressive regimes of the past. Specifically, Dorfman relates the election of Trump to the CIA-led coup that installed Pinochet as dictator in Chile: an event that upended Dorfman's life, as well as the fate of the country. With corruption and repression looming, he wonders, can the United States avoid the same kind of political interference it practiced in the past? Reflecting Dorfman's virtuosity across genres, the essays of Homeland Security Ate My Speech are concise, yet highly original and playful; one takes the form of a letter from a sixteenth-century King of Spain to Donald Trump, praising him for his intolerance, and urging a revival of the Inquisition, while another begins with Dorfman's memory of seeing a monster movie as a child (I can remember gripping my mother's hand tight) and segues into a thoughtful meditation on Trump via Mary Shelley's novel Frankenstein. Dorfman brings a rich array of literary references to his discussion of America's current malaise; other authors he invokes include Faulkner, Shakespeare, Cervantes, Melville, Lewis Carroll, and Dave Eggers.