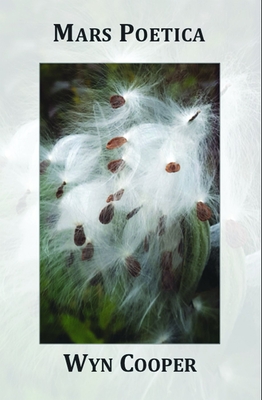 In Mars Poetica, Wyn Cooper explores the conscious and unconscious ways we comprehend both the world around us and the one inside. From subjects like fashion, film, music, and painting, to more solemn and universal themes such as desire, anxiety, and loss, Cooper shows how such disparate topics can mirror each other in ways that help us to illuminate our lives. Employing various styles, forms, and sensibilities, Cooper's poems both celebrate and mourn, as a means of illustrating the necessity for maintaining equilibrium in an increasingly unbalanced world.

Wyn Cooper has published four previous books of poetry, most recently Chaos is the New Calm (BOA Editions, 2010). His poems, stories, essays, and reviews have appeared in Poetry, Ploughshares, AGNI, The Southern Review, Five Points, Slate, and more than 100 other magazines. His poems are included in 25 anthologies of contemporary poetry, including Poetry: An Introduction, The Mercury Reader, Outsiders, and Ecstatic Occasions, Expedient Forms. In 1993, "Fun," a poem from his first book, was turned into Sheryl Crow's Grammy-winning song "All I Wanna Do." He has also cowritten songs with David Broza, David Baerwald, Jody Redhage, and Bill Bottrell. In 2003, Gaff Music released Forty Words for Fear, a CD of songs based on poems and lyrics by Cooper, set to music and sung by the novelist Madison Smartt Bell. Their second CD, Postcards Out of the Blue, based in part on Cooper's postcard poems, was released in 2008. Their songs have been featured on six television shows. Cooper has taught at the University of Utah, Bennington College, Marlboro College, and at The Frost Place. He has given readings across the country, as well as in Europe. He is a former editor of Quarterly West, and the recipient of a fellowship from the Ucross Foundation. For two years he worked at the Harriet Monroe Poetry Institute, a think tank run by the Poetry Foundation, and now serves on the Writers Advisory Board of the Nantucket Book Festival. He lives in Boston and works as a freelance editor. www.wyncooper.com