Excuse Me While I Slip into Someone More Comfortable (Hardcover) 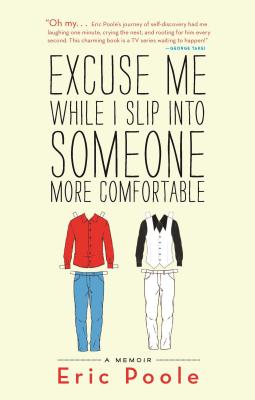 By Eric Poole
$24.99
It's Complicated--Contact Us for More Information

In 1977, Eric Poole is a talented high school trumpet player with one working ear, the height-to-weight ratio of a hat rack, a series of annoyingly handsome bullies, and a mother irrationally devoted to Lemon Pledge. But who he wants to be is a star…ANY star. With equal parts imagination, flair, and delusion, Eric proceeds to emulate a series of his favorite celebrities, like Barry Manilow, Halston, Tommy Tune, and Shirley MacLaine, in an effort to become the man he’s meant to be—that is, anyone but himself.

As he moves through his late teens and early twenties in suburban St. Louis, he casts about for an appropriate outlet for his talents. Will he be a trumpet soloist? A triple-threat actor/singer/dancer? A fashion designer in gritty New York City?

Striving to become the son who can finally make his parents proud, Eric begins to suspect that discovering his personal and creative identities can only be accomplished by admitting who he really is. Picking up at the end of his first acclaimed memoir, Where’s My Wand?, Poole’s journey from self-delusion to acceptance is simultaneously hysterical, heartfelt, and inspiring.

Eric Poole’s first memoir received rave reviews and was developed as a television series for ABC. He has written for the Huffington Post, CNN, and The Advocate, and spends more time than he would like penning commercials for everything from McRibs to tampons to TV shows about celebrities boxing. He lives in Southern California with his partner of 16 years. This is his second memoir. Visit www.ericpoole.net for more information.

"Oh, my... Eric Poole's journey of self-delusion and self-discovery had me laughing one minute, crying the next, and rooting for him every second. This charming book is a TV series waiting to happen!" —George Takei, author, actor, and activist

“Punctuated with highly effective humor, this book could easily serve as a resource for any closeted individuals looking to read another success story. A magnetic collection of real stories that sheds a new light on life in the Midwest.” —Kirkus, starred review

“A touching and RIOTOUSLY funny story about one boy’s search for his personal and creative identities in the 1980’s Midwest. You’ll laugh, you’ll cry, you’ll keep your jazz hands to yourself, Mister.” —Judith Newman, author of To Siri, With Love

“A courageous and boldly honest memoir. Eric Poole says things people feel but would never admit to, which makes him vulnerable and endearing." —Wendy E. Simmons, author of My Holiday in North Korea

"Equally funny and poignant, Poole's memoir-in-essays is like David Sedaris by way of Judd Apatow, showing how we (everyone really, but particularly LGBT people) often have to try on identities like pieces of clothing, to see what fits and what doesn't. In between the laughs, you'll feel the longing Poole describes for another life, those sometimes-painful glimpses of a realer, truer you."  — Michelle Hart, BOOKRIOT

"Former St. Louisan Eric Poole’s second memoir is an anguished and funny romp through Florissant and the Central West End in the 1970s and 1980s that leaves no good detail unpunished." —St. Louis Dispatch

“Wry, witty, and insightful, Excuse Me While I Slip Into Someone More Comfortable is thoroughly enjoyable from cover to cover.” —Midwest Book Review