Disarmament in the Time of Perestroika: Arms Control and the End of the Soviet Union (Paperback) 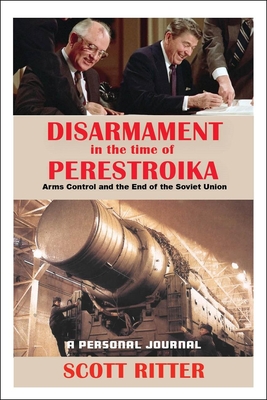 Disarmament in the Time of Perestroika is the definitive history of the implementation of the INF Treaty signed by Mikhail Gorbachev and Ronald Reagan in all its complexities, and the lengths both sides went to "trust, but verify" this successful and unique historic disarmament process. It demonstrates how two nations fundamentally at odds with one another could come together and rid the world of weapons which threatened international peace and security and, indeed, all of humanity. Those engaged were pioneers in what was to be the new frontier of superpower arms control--on-site inspection--that would define compliance verification for future treaties and agreements to come. Their work represents not just a guide to but the standard upon which all future on-site inspections will be based and judged.
Ritter traces in great detail the formation of the On-Site Inspection Agency, who was involved, and how a technologically advanced compliance verification system was installed outside the gates of one of the most sensitive military industrial facilities in the remote Soviet city of Votkinsk, nestled in the foothills of the Ural Mountains in the Soviet Union. He draws upon his own personal history-- occasionally hilarious, occasionally fraught with peril-- as well as the recollections of the other inspectors and personnel involved, and an extensive archive of reports and memoranda relating to the work of OSIA to tell the story of how OSIA was created, and the first three years of inspection operations at the Votkinsk portal monitoring facility. The Votkinsk Portal, circa December 1988, was the wild, wild East of arms control, a place where the inspectors and inspected alike were writing the rules of the game as it played out before them.
This treaty implementation did not occur in a geopolitical vacuum. Ritter captures, on a human level, the historic changes taking place inside the Soviet Union under the leadership of Mikhail Gorbachev due to the new policies of perestroika and glasnost that gripped the Soviet Union during this time, and their real and meaningful impact on the lives of the Soviet people, and the economic functioning of the Soviet nation. Much of it was for the worse.
The INF treaty was not only born of these new policies, but also helped trigger meaningful changes inside the Soviet Union due to the economic and political implications brought on by the cessation of missile production in a factory town whose lifeblood was missile production.