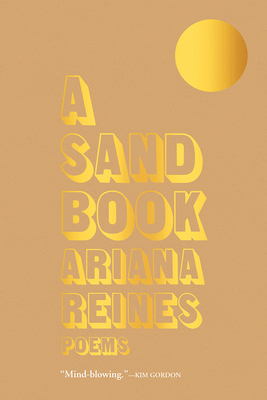 Longlisted for the National Book Award

“Her writing is queer and raunchy, raw and occult, seemingly never pulling away from her deepest vulnerabilities. Yet Reines simultaneously maintains a feeling of epic poetry, of ancient intention.” —Diana Arterian, The New York Times

A Sand Book is a poetry collection in twelve parts, a travel guide that migrates from wildfires to hurricanes, tweety bird to the president, lust to aridity, desertification to prophecy, and mother to daughter. It explores the negative space of what is happening to language and to consciousness in our strange and desperate times. From Hurricane Sandy to the murder of Sandra Bland to the massacre at Sandy Hook, from the sand in the gizzards of birds to the desertified mountains of Haiti, from Attar's “Conference of the Birds” to Chaucer’s “Parliament of Fowls” to Twitter, A Sand Book is about change and quantification, the relationship between catastrophe and cultural transmission. It moves among houses of worship and grocery stores, flitters between geological upheaval and the weird weather of the Internet. In her long-awaited follow-up to Mercury, Reines has written her most ambitious work to date, but also her most visceral and satisfying.

Her writing is queer and raunchy, raw and occult, seemingly never pulling away from her deepest vulnerabilities. Yet Reines simultaneously maintains a feeling of epic poetry, of ancient intention. She moves between worlds in search of the divine and the self.
— The New York Times

Reines navigates existential calamity as she does literature and language. . . . A Sand Book shows her consciousness at its most expansive and integrated to date. These poems understand nothing so well as their own inevitable incompleteness—that no composition could contain everything, that every history is partial

These
are the kinds of poems that reorient you in the world, make you understand how
little you know, but how much is inside you. Lines like 'the suffering of woman
is / the story of the universe' will linger in the front of your skull,
imprinting themselves on your consciousness in a way that feels risky and real,
like you've unlocked the key to some hidden truth, some undiscovered light.
— NYLON

Maybe you don't automatically reach for poetry when you're plugging the Coors into your beach cooler, but Ariana Reines' A Sand Book is an epic, perfect beach read. At nearly 400 pages, this gorgeous and terrifying travelogue and book of mourning has enough poems to get you from blue June to haunted October.

A Sand Book’s achievement, in its lyricism and its philosophy, cannot be understated. With this book of books, Reines transmits and distills the miasma of our reality—in all of its impossible completeness—in order to leave us with something that feels like truth.

Reines’s books are works of intellectual commitment and structural sophistication; at the same time, they allow the raw stuff of being, in all its messiness, to enter the page. . . . It is Western poetry returned to its ‘epic’ classical origins—meaty and full of drama, with more Big Dick Energy than any ‘Great American Novel’.
— The White Review

Read her for the power of her vision, and for her willingness to look at tragedy, whether personal or planetary, head-on. As the planet grows hotter, as civilization becomes increasingly brutal, banal, and irreal, a voice as powerful as Reines’s is too valuable to neglect. A Sand Book is a necessary guide to a future rapidly becoming the present, a map of the desert we all have to navigate.

Ariana Reines is my favorite living poet, and A Sand Book is one of her greatest acts of alchemy: a poetic supernova transcending magazine feminism, faultless views, the branding of basically everything. To be fully human requires an act of sorcery nowadays, and Reines is that sorceress.

— Melissa Broder, author of The Pisces

Ariana Reines is a go-for-broke artist who honors her traditions by being like no one else. Some of us have made a fetish of our stupidity, pretending to forget history, and some of us have made a fetish of despair, congratulating ourselves on melancholia, but Ariana is too brilliant and too alive for either of those sad luxuries. Her poems and various performances and even her posts are fetishes in a much deeper sense: they are sites of (and screens for) irrational and transpersonal powers. I am convinced of the authenticity of the summonses she receives and the summonses she issues and when I read her I am reminded that all of this is a calling before it’s an identity or career. Her voice—which is always more than hers alone—is a dialectic between the very ancient and the bleeding edge. I just looked up 'bleeding edge' on Wikipedia and here is what it says: 'A technology may be considered bleeding edge where it contains a degree of risk.' There might be 'a lack of consensus.' Or 'a lack of testing.' There might be 'industry resistance to change.' With Ariana’s art the risks are real and we should run them.
— Ben Lerner, author of The Topeka School