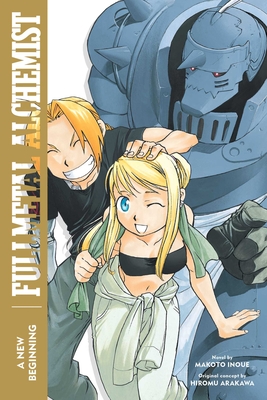 This is book number 6 in the Fullmetal Alchemist (Novel) series.

Somewhere between magic, art and science exists a world of alchemy. And into this world travel Edward and Alphonse Elric—two brothers in search of the Philosopher's Stone, the ultimate alchemical treasure!

Winry, childhood friend of the Elric brothers, is ecstatic to advance her training as an automail mechanic in Rush Valley. Her passion and skills are tested when she crosses paths with a boy who lost a leg and can’t get back on his feet. Meanwhile, Edward and Alphonse Elric just can’t seem to stay out of trouble, even when they’re trying to get noticed for doing good deeds!

Born in Hokkaido, Japan, Hiromu Arakawa first attracted attention in 1999 with her award-winning manga Stray Dog. Her series Fullmetal Alchemist was serialized from 2001 to 2010 with a story that spanned 27 volumes and became an international critical and commercial success, receiving both the Shogakukan Manga Award and Seiun Award and selling over 70 million copies worldwide. Fullmetal Alchemist has been adapted into anime twice, first as Fullmetal Alchemist in 2003 and again as Fullmetal Alchemist: Brotherhood in 2009. The series has also inspired numerous films, video games and novels.