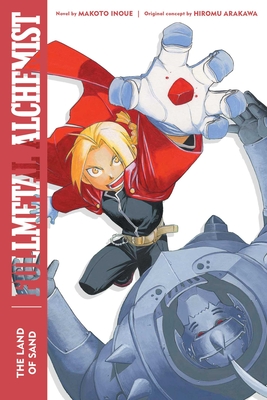 This is book number 1 in the Fullmetal Alchemist (Novel) series.

Somewhere between magic, art and science exists a world of alchemy. And into this world travel Edward and Alphonse Elric—two brothers in search of the Philosopher's Stone, the ultimate alchemical treasure!

The mining town of Xenotime has seen better days. Once renowned for its skilled goldsmiths, it now lies forgotten in a sea of sand, its mines empty and its fields barren. The townsfolk’s only hope lies with the talented state alchemist Edward Elric and his brother, Alphonse. But who is the real Edward Elric? When the Fullmetal Alchemist and his brother arrive in Xenotime searching for the Philosopher’s Stone, they discover that two strangers have stolen their names and their reputations! Will the real Elric brothers set things right, or will the battle between the true and false brothers shatter Xenotime’s only chance for survival?

Plus a bonus story, The Phantom of Warehouse 13!

Born in Hokkaido, Japan, Hiromu Arakawa first attracted attention in 1999 with her award-winning manga Stray Dog. Her series Fullmetal Alchemist was serialized from 2001 to 2010 with a story that spanned 27 volumes and became an international critical and commercial success, receiving both the Shogakukan Manga Award and Seiun Award and selling over 70 million copies worldwide. Fullmetal Alchemist has been adapted into anime twice, first as Fullmetal Alchemist in 2003 and again as Fullmetal Alchemist: Brotherhood in 2009. The series has also inspired numerous films, video games and novels.