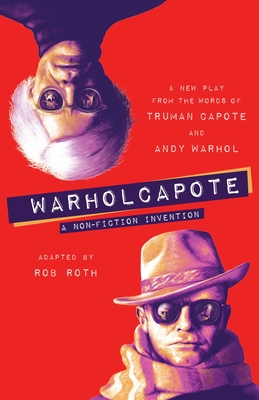 An enthralling play based on lost tapes between two cultural giants and friends—Andy Warhol and Truman Capote.

In 1978 Andy Warhol and Truman Capote decided to write a Broadway play. Andy suggested that he record their private conversations over the period of a few months, and that these tapes would be the source material for the play. The tapes were then filed away and forgotten. Their play was never completed.

Now, award-winning director Rob Roth brings their vision to life after a years-long search to unearth the eighty hours of tapes between two of the most daring artists of postwar America. WARHOLCAPOTE, based on words actually spoken by the two men, is set in the ’70s and ’80s, toward the end of their close connection and not too long before their untimely deaths. Their special, complex friendship is captured by Roth with bracing intimacy as they discuss life, love, and art and everything in between. Every word in the play comes directly from these two 20th century geniuses. The structure of the conversations springs from Roth’s imagination.

Rob Roth was nominated for a Tony Award as Best Director for his Broadway debut, Beauty and the Beast, which became one of the top ten longest-running musicals in Broadway history. The show has been seen by over 40 million people all over the world, winning the Olivier Award for Best Musical in London. Rob went on to direct the world premiere of Elaborate Lives: The Legend of Aida, collaborating with Sir Elton John and Sir Tim Rice. Rob directed the Broadway musical Lestat, based on the Anne Rice Vampire Chronicles with a score by Elton John and Bernie Taupin. Rob frequently directs rock concerts, collaborating with legendary artists including KISS, Alice Cooper, Dresden Dolls, Cyndi Lauper, and guitar legend Steve Miller. Rob is an avid collector of rock and roll graphics, and his collection is showcased in the coffee table book The Art of Classic Rock. Rob and his husband Patrick live in New York City with their labrador retriever Tag.

PRAISE FOR WARHOLCAPOTE THE BOOK

"Capote and Warhol fanatics will relish ‘hearing’ directly from the artists." —Publishers Weekly

"A poignant drama about two influential yet fragile figures grappling with the 'very excruciating life' of an artist."—Kirkus Reviews

PRAISE FOR THE PRODUCTION OF WARHOLCAPOTE

"A sobering perspective on the toxic highs of celebrity."—New York Times

"The show certainly deserves to be famous far longer than Warhol's proclaimed 15 minutes."—Variety