Stalking Shakespeare: A Memoir of Madness, Murder, and My Search for the Poet Beneath the Paint (Hardcover) 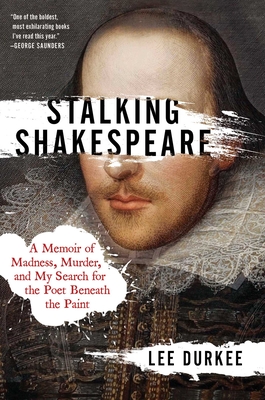 A darkly humorous and spellbinding detective story that chronicles one Mississippi man’s relentless search for an authentic portrait of William Shakespeare.

Following his divorce, down-and-out writer and Mississippi exile Lee Durkee holed himself up in a Vermont fishing shack and fell prey to a decades-long obsession with Shakespearian portraiture. It began with a simple premise: despite the prevalence of popular portraits, no one really knows what Shakespeare looked like. That the Bard of Avon has gotten progressively handsomer in modern depictions seems only to reinforce this point.

Stalking Shakespeare is Durkee’s fascinating memoir about a hobby gone awry, the 400-year-old myriad portraits attached to the famous playwright, and Durkee’s own unrelenting search for a lost picture of the Bard painted from real life. As Durkee becomes better at beguiling curators into testing their paintings with X-ray and infrared technologies, we get a front-row seat to the captivating mysteries—and unsolved murders—surrounding the various portraits rumored to depict Shakespeare.

Whisking us backward in time through layers of paint and into the pages of obscure books on the Elizabethans, Durkee travels from Vermont to Tokyo to Mississippi to DC and ultimately to London to confront the stuffy curators forever protecting the Bard’s image. For his part, Durkee is the adversary they didn’t know they had—a self-described dilettante with nothing to lose, the “Dan Brown of English portraiture.”

A lively, bizarre, and surprisingly moving blend of biography, art history, and madness, Stalking Shakespeare is as entertaining as it is rigorous and will forever change the way you look at one of history’s greatest cultural and literary icons.

Lee Durkee is the author of The Last Taxi Driver, named a Kirkus Reviews Best Novel of 2021, Rides of the Midway, and Stalking Shakespeare. His stories and essays have appeared in Harper's, The Sun, Oxford American, Zoetrope: All Story, and Mississippi Noir. He lives in Oxford, Mississippi.

"One of the boldest, most exhilarating books I've read this year. Durkee is a great raconteur, whose curiosity and love for literature is positively contagious. Somewhere Shakespeare—whatever he actually looked like—is smiling." —George Saunders, author of Lincoln in the Bardo

“Stalking Shakespeare is beautiful, weird, poignant, genre-bending, and should rattle the zeitgeist. Follow Lee Durkee as he tries to glimpse the true face of the Bard and, along the way, maybe catch sight of his own true face, too.” —Wright Thompson, senior writer for ESPN and author of Pappyland

"Full-on, absolute genius. Stalking Shakespeare is smart, funny, wise, genuine, and most important, relentlessly entertaining from start to finish. I've never read anything quite as surprising and set apart as this book—Lee Durkee has hit the jackpot." —Martin Clark, author of The Substitution Order

"Lee Durkee’s brilliant memoir Stalking Shakespeare is a nesting doll—the outside shows various takes on the Bard’s visage, but inside there’s obsession, madness, drugs and booze, murder, good fatherhood, confusion, humanity, unrequited love, heart and soul. For readers interested in Shakespeare, art history, conniving scholars, or any of the book's locales: Vermont, Japan, Mississippi, England. And it’s hilarious. This memoir deserves a shelf of its own. Perfect." —George Singleton, author of You Want More: Selected Stories