Giuliani: The Rise and Tragic Fall of America's Mayor (Hardcover) 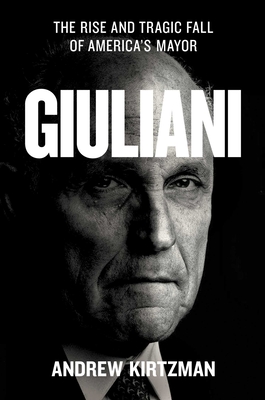 What happened to Rudy Giuliani?

Andrew Kirtzman, who has been following Giuliani since the 1990s, answers that question in this “masterful and engrossing” (The Guardian) biography that “cuts through the myth and caricature that has too often defined Giuliani” (Los Angeles Times).

Rudy Giuliani was hailed after 9/11 as “America’s Mayor,” a national hero who, at the time, was more widely admired than the pope. He was brilliant, accomplished—and complicated. He conflated politics with morality, made reckless personal choices, and engaged in self-destructive behavior. A series of disastrous decisions and cynical compromises, coupled with his need for power, money, and attention gradually ruined his reputation, cost him political support, and ultimately damaged the country.

Kirtzman, who was with Giuliani at the World Trade Center on 9/11, conducted hundreds of interviews to give us an insightful portrait of this polarizing figure from the beginning of his rise to his high-profile role as Donald Trump’s personal lawyer. Giuliani was a celebrated prosecutor, a transformative New York City mayor, and a contender for the presidency. But by the end of the Trump presidency, he was reviled and ridiculed after a series of embarrassing errors and misjudgments. He was a significant figure in both of Trump’s impeachments and ended up widely ostracized, facing both legal jeopardy and financial ruin.

This is the “lively new biography” (The New Yorker) of how it all began and how it came crashing down.

Andrew Kirtzman has covered Rudy Giuliani for three decades as a political reporter for print and television. He began as a City Hall reporter and then wrote what is considered a definitive book about Giuliani’s mayoralty. He was with Giuliani on the morning of September 11th and chronicled their experience together. He has covered more than a dozen national political campaigns and hosted two of New York’s most widely watched political shows, winning multiple Emmy Awards. He has written for The New York Times, The Washington Post, The New Republic, and other publications, and authored a book about the Bernie Madoff scandal. He appears regularly on CNN and MSNBC to discuss politics and government.

“Cuts through the myth and caricature that has too often defined Giuliani. . . . As a former television reporter for NY1, Kirtzman knows the man better than the pundits who have often scratched their heads about the Giuliani they thought they knew. . . . If Giuliani’s story is a tragedy, Kirtzman argues that it’s self-inflicted through a combination of alcohol, sanctimony and a bottomless need for attention.”
— Chris Megerian

“Masterful and engrossing. . . . Capture[s] what made the man tick and what led to his fall from grace. Kirtzman’s critique is leavened with bittersweet impressions and references to Giuliani’s accomplishments.”
— Lloyd Green

"A lively new biography explores how the man once celebrated as 'America’s mayor' fell into disgrace."
— Louis Menand

"The same 'fanatical sense of righteousness' that propelled Rudy Giuliani’s rise set him on the road to ruin, according to this richly detailed biography. . . . A comprehensive and alarming portrait of Giuliani’s downfall."
— Publishers Weekly

"A veteran political reporter ventures an answer to the question so many have asked in recent years about Rudy Giuliani: 'What happened?'. . . . A sad tale, expertly told, of corruption, bad judgment, avarice, and treason."
— Kirkus Reviews (starred review)