Moonlight and the Pearler's Daughter (Hardcover) 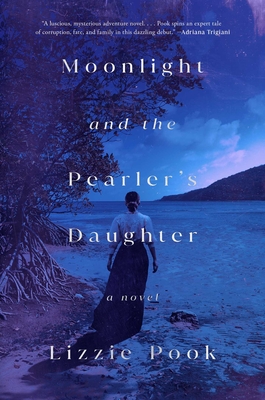 For readers of The Light Between Oceans and The Island of Sea Women, a feminist adventure story set against the backdrop of the dangerous pearl diving industry in 19th-century Western Australia, about a young English woman who sets off to uncover the truth about the disappearance of her eccentric father.

Western Australia, 1886. After months at sea, a slow boat makes its passage from London to the shores of Bannin Bay. From the deck, young Eliza Brightwell and her family eye their strange, new home. Here is an unforgiving land where fortune sits patiently at the bottom of the ocean, waiting to be claimed by those brave enough to venture into its depths. An ocean where pearl shells bloom to the size of soup plates, where men are coaxed into unthinkable places and unspeakable acts by the promise of unimaginable riches.

Ten years later, the pearl-diving boat captained by Eliza’s eccentric father returns after months at sea—without Eliza’s father on it. Whispers from townsfolk point to mutiny or murder. Headstrong Eliza knows it’s up to her to discover who, or what, is really responsible.

As she searches for the truth, Eliza discovers that beneath the glamorous veneer of the pearling industry, lies a dark underbelly of sweltering, stinking decay. The sun-scorched streets of Bannin Bay, a place she once thought she knew so well, are teeming with corruption, prejudice, and blackmail. Just how far is Eliza willing to push herself in order to solve the mystery of her missing father? And what family secrets will come to haunt her along the way?

A transporting feminist adventure story based on Lizzie Pook’s deep research into the pearling industry and the era of British colonial rule in Australia, Moonlight and the Pearler’s Daughter is ultimately about the lengths one woman will travel to save her family.

Lizzie Pook is a London-based travel writer and journalist whose work has taken her to some of the farthest-flung parts of the planet, from the trans-Himalayas—in search of elusive snow leopards—to the vast, uninhabited east coast of Greenland. She has written for The Guardian, The Telegraph, The Times (London), The Evening Standard, and Stylist. Moonlight and the Pearler’s Daughter is her first novel.

“A sensitive and compassionate book, admirable in its engaging synthesis of multiple strands of history. It is alive to the complexity of how things must have been, and its consideration of race, gender and sexuality invigorates the era with a freshness that feels organic…. At its heart, this is a story about family — whether it can survive in an inhospitable environment — and whether it is possible to be a good person in a corrupted world.”—New York Times Book Review
— New York Times Book Review

“A sensitive and compassionate book, admirable in its engaging synthesis of multiple strands of history. It is alive to the complexity of how things must have been, and its consideration of race, gender and sexuality invigorates the era with a freshness that feels organic…. At its heart, this is a story about family — whether it can survive in an inhospitable environment — and whether it is possible to be a good person in a corrupted world.”—New York Times Book Review
— New York Times Book Review

“With the spirited Eliza at its heart, Pook’s evocative debut novel spins a tale of intrigue and deception with a deft combination of gripping pacing and emotional restraint. Travel writer and journalist Pook’s heightened observational skills are well employed in this lavish tableau showcasing Australia’s vast and exotic natural treasures and fraught history.”—Booklist, starred review

“Beautifully evocative prose describing landscape and people intertwine in this bittersweet story of love, family, and courage. The small cast of characters, each wonderfully fleshed out, and Eliza’s quest are what propel the story. Alongside the characters, it is place that is the book’s focus: the ocean and the land complement and enhance Eliza’s investigation. VERDICT Readers will delight in the descriptive language that the author employs, so much so that they themselves will hear the sea and feel the desiccation of the heat and loneliness of the land.”—Library Journal

"[MOONLIGHT AND THE PEARLER’S DAUGHTER] atmospheric, evocative descriptions of the Western Australian landscape are an absolute masterclass in place—as well as being a proper, page-turning adventure.”--Ellery Lloyd, author of The Club

“Lizzie Pook’s meticulous research delivers an extraordinarily vivid tale in Moonlight and the Pearler’s Daughter. Readers will fall in love with the characters in this book, especially the courageous, stubborn Eliza, and will find themselves transported to Bannin Bay in the late 1800s. I could not put this book down. Lizzie Pook is an author to watch!”--Kelly Rimmer, New York Times bestselling author of The Warsaw Orphan

"Lizzie Pook has written a luscious, mysterious, adventure novel set in the halcyon days of Australia's lucrative pearling industry in the late 1800's. When Eliza Brightwell's father goes missing on a diving boat, his courageous, headstrong daughter refuses to accept his fate. As Eliza seeks the truth, her father's odyssey becomes her own. She confronts danger and unearths secrets that will change the course of her life. Pook spins an expert tale of corruption, fate and family in this dazzling debut."--Adriana Trigiani, bestselling author of The Good Left Undone

"This is a stunning debut. From the very first line, this novel drew me fully into its gritty yet captivating world. MOONLIGHT AND THE PEARLER’S DAUGHTER paints a memorable picture of ambition, sacrifice and corruption while exploring personal loss as driving force. I will never look at a string of pearls in quite the same way."--Charmaine Wilkerson, author of Black Cake

"Gritty, lyrical, breathtaking. I couldn’t put it down, drawn in by its vividly-drawn characters and wealth of historical detail."--Fiona Valpy, author of The Dressmaker's Gift

“A lush mystery with a vivid and unique setting, wonderous prose, layered characters and a satisfying end. Pook has crafted a historical adventure I won't forget!”--T.A. Willberg, author of Marion Lane and the Midnight Murder