A History of Fear: A Novel (Hardcover) 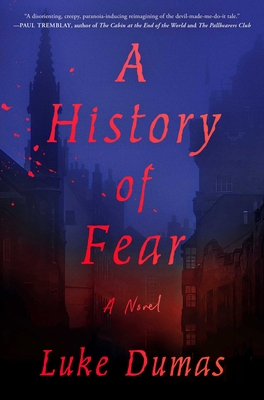 It's officially winter time so you know what that means... horror becomes much more terrifying (at least to me). In this chilling novel, the devil is in Scotland. When the country's most notorious serial killer is found dead in his cell, officers find a handwritten manuscript that promises to answer the question everyone's been wondering about: was he a lunatic, or was he telling the truth in saying that the devil made him do it...

— From A History of Fear

This “disorienting, creepy, paranoia-inducing reimagining of the devil-made-me-do-it tale” (Paul Tremblay, author of The Cabin at the End of the World) follows the harrowing downfall of a tortured graduate student arrested for murder.

Grayson Hale, the most infamous murderer in Scotland, is better known by a different name: the Devil’s Advocate. The twenty-five-year-old American grad student rose to instant notoriety when he confessed to the slaughter of his classmate Liam Stewart, claiming the Devil made him do it.

When Hale is found hanged in his prison cell, officers uncover a handwritten manuscript that promises to answer the question that’s haunted the nation for years: was Hale a lunatic, or had he been telling the truth all along?

The first-person narrative reveals an acerbic young atheist, newly enrolled at the University of Edinburgh to carry on the legacy of his recently deceased father. In need of cash, he takes a job ghostwriting a mysterious book for a dark stranger—but he has misgivings when the project begins to reawaken his satanophobia, a rare condition that causes him to live in terror that the Devil is after him. As he struggles to disentangle fact from fear, Grayson’s world is turned upside-down after events force him to confront his growing suspicion that he’s working for the one he has feared all this time—and that the book is only the beginning of their partnership.

“A modern-day Gothic tale with claws” (Jennifer Fawcett, author of Beneath the Stairs), A History of Fear marries dread-inducing atmosphere with heart-palpitating storytelling.

Luke Dumas is the author of the novel A History of Fear. His nonfiction has appeared in Literary Hub, Hobart, Last Exit, Panorama: The Journal of Travel, Place, and Nature, and more. Born and raised in San Diego, California, Luke has worked in nonprofit philanthropy for more than ten years with organizations such as San Diego Zoo Wildlife Alliance and the American Red Cross. He received his master’s degree in creative writing from the University of Edinburgh and is a graduate of the University of Chicago. He lives in Florida with his husband and dogs.

“A History of Fear is a chilling read for a dark winter night. It will leave the reader with questions and doubt, and will get under one’s skin because of it." —The Library Ladies

“A History of Fear succeeds on so many levels—as a haunting tale of the supernatural, a harrowing story of suspense, and a stark warning about the power of our inner demons. I consumed this book breathlessly, and every time I think of its jaw-dropping ending, I feel a chill all over again.”—This is Horror

"A methodical story about evil—its mystery and its toll—takes its murderous narrator past the brink of sanity. . . . Lean and propulsive, this dissection of evil marches forward with a deadly logic and sleight of hand, with occasional gaps filled in by an enterprising journalist and a Scottish information commissioner. The key is that we feel for Grayson as he leads us up to the brink of his terrible deed. The characters surrounding him, from his ghoulish family to his annoying roommate to his eventual victim, come to life on the page, all part of Grayson’s living nightmare. . . . It’s a patient pursuit and a patient book, one that builds without the reader quite realizing it. It blurs the line between mental illness and something less definable, more supernatural and sinister. A muscular, enigmatic, and devilishly smart read." —Kirkus Reviews, starred review

“[A] stellar debut, a complex whydunit . . . . Admirers of Andrew Pyper’s The Demonologist will be riveted.” —Publishers Weekly, starred review

"A delicious walk along the razor's edge between the imagined and the supernatural, A History of Fear is candy for readers who like their thrills real and their horror a worrying whisper in their head." —Andrew Pyper, author of The Demonologist and The Residence

“A History of Fear presents itself as a disquieting cache of nightmares, a nested doll narrative that reads like a found-footage Falling Angel by William Hjortsberg. Readers, beware: this novel is not safe and will have you questioning what's real for many sleepless nights to come.” —Clay McLeod Chapman, author of The Remaking, Whisper Down the Lane, and Ghost Eaters

"A History of Fear succeeds on so many levels—as a haunting tale of the supernatural, a harrowing story of suspense, and a stark warning about the power of our inner demons. I consumed this book breathlessly, and every time I think of its jaw-dropping ending, I feel a chill all over again." —Megan Collins, author of The Family Plot

"A History of Fear is a disorienting, creepy, paranoia-inducing reimagining of the devil-made-me-do-it tale. A clever, twisty novel, imbued with emotional and psychological insight. Luke's vision of Old Scratch left me thrilled and looking over my shoulder." —Paul Tremblay, author of The Cabin at the End of the World and The Pallbearers Club

“A History of Fear deftly plays with perception and will have you questioning what is real and what horrors we are capable of. A modern-day Gothic tale with claws, it latches into you and doesn’t let go.” —Jennifer Fawcett, author of Beneath the Stairs