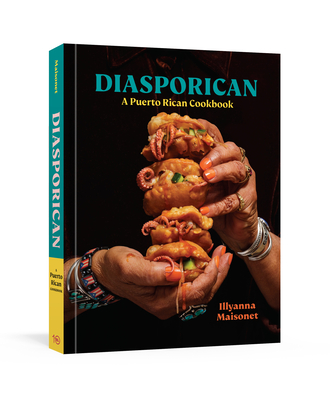 I am very much Not a Cook, but this book inspired me to try. Maisonet is like a personal cooking coach, and I love how she redefines authenticity as she knows it.

“A delicious journey through purpose, place, and the power of food that you won’t want to miss.”—José Andrés, chef, cookbook author, and founder of World Central Kitchen

ONE OF THE BEST COOKBOOKS OF THE YEAR: Saveur, Smithsonian magazine

Illyanna Maisonet spent years documenting her family’s Puerto Rican recipes and preserving the island’s disappearing foodways through rigorous, often bilingual research. In Diasporican, she shares over 90 recipes, some of which were passed down from her grandmother and mother—classics such as Tostones, Pernil, and Arroz con Gandules, as well as Pinchos with BBQ Guava Sauce, Rabbit Fricassee with Chayote, and Flan de Queso.

In this visual record of Puerto Rican food, ingredients, and techniques, Illyanna traces the island’s flavor traditions to the Taino, Spanish, African, and even United States' cultures that created it. These dishes, shaped by geography, immigration, and colonization, reflect the ingenuity and diversity of their people. Filled with travel and food photography, Diasporican reveals how food connects us to family, history, conflict, and migration.

Michael W. Twitty is a food writer, independent scholar, culinary historian, and author of the award-winning The Cooking Gene. He is personally charged with preparing, preserving, and promoting African American foodways and its parent traditions in Africa and her Diaspora and its legacy in the food culture of the American South. He is also a Judaic studies teacher from the Washington, D.C., area.

“lllyanna brings her brilliant, sincere perspective to tell us about the impact and influence of the food of the Puerto Rican Diaspora. Boriquen people have been dispersed over generations, by every force from colonialism to Hurricane Maria, and lllyanna’s own story is defined by the same resilience and sazón that flavors the food of the Isla del Encanto. Diasporican is a delicious journey through purpose, place, and the power of food that you won't want to miss.”—José Andrés, chef, cookbook author, and founder of World Central Kitchen

“Somehow, lllyanna can make you laugh out loud while you're reading the pantry section of her cookbook. That’s how bold, bright, and alive her voice is, and that's why she has created something with Diasporican that no one else could: a brilliant and heart-breaking ode to the disconnect of diaspora identity and all the delicious fruits of such a rupture. She ignores no pain yet lets no joke go untold as she gives us her singular spin on a cuisine that contains seemingly endless mystery, possibility, and flavor.”—Alicia Kennedy, food writer

“This book BRINGS IT: In voice, instructions, visuals, history, education, and hilarity—a decolonization of the cookbook world like few others.”—Gustavo Arellano, author of Taco USA: How Mexican Food Conquered America

“Puerto Rico has a unique niche in the cuisine of the Americas, and I can't imagine a happier situation than having lllyanna Maisonet as a guide. Diasporican is the kind of book that makes you want to run to the kitchen and then book a flight.”—Steve Sando, founder and owner of Rancho Gordo

“Finally, a most overdue book that builds a bridge to understanding and opens a door into the food and culture of Puerto Ricans. And it has arrived from none other than lllyanna Maisonet, who has the power to bring us all in through her raw honesty, true grit, unbridled passion, and irresistible sazón. This is a treasure of a book-an honor to hold, a delight to read, and a feast to cook from.”—Pati Jinich, Mexican chef, cookbook author, and television host

“The cookbook you are holding is a forceful love letter to a culinary tradition often sidelined and caught up in its perceived ambiguity . . . The strength of Diasporican is that it moves the conversation beyond the island, drawing us into the essence of Puerto Rican food as it morphs across North America. In these pages, we go to New York, New Jersey, Connecticut, Hawai’i, Chicago, California, and beyond, getting a real sense of what matters most in Puerto Rican culture and civilization—family, friends, spirit, ancestors, rhythm, and joy-inducing flavor.”—from the foreword, by Michael W. Twitty