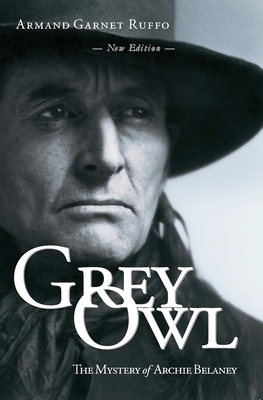 By Armand Garnet Ruffo
$18.00
It's Complicated--Contact Us for More Information

Award-winning author Armand Garnet Ruffo’s compelling collection is being re-released with a new introduction by the author, which delves into his family’s personal connection with Archie Belaney and into the questions of voice and appropriation that swirl around Grey Owlat a time when these discussions have never been more important. In a fascinating mixture of poetry, fiction, letter, and news report, Ruffo recreates the life of a man who recreated himself entirely and sold that story to the world. In the original back cover copy author Thomson Highway stated that “Armand Ruffo is definitely a writer with a future, a writer to be watched.” Highway’s observation has been borne out and now, twenty-five years after this collection was first released, a revised edition will return to bookstores.

Armand Garnet Ruffo was born and raised in northern Ontario and draws upon his Ojibwe heritage for much of his writing. A multi-genre writer, he is the author of Grey Owl: The Mystery of Archie Belaney and Norval Morrisseau: Man Changing into Thunderbird, a finalist for the 2015 Governor General’s Literary Awards. His latest collection of poetry is The Thunderbird Poems. Other projects include Sounding Thunder: The Song of Francis Pegahmagabow, a musical drama that premiered in the summer of 2018, and On the Day the World Begins Again, a short film about Indigenous incarceration that will premiere in October 2018. His writing most recently appeared in ARC Poetry, GRANTA: Canada issue, EVENT, and 150, Canada’s History in Poetry (Nimbus Publishing). Ruffo is the recipient of a Honourary Life Member Award from the League of Canadian Poets and an inaugural Mayor’s Arts Award from the City of Kingston. He is currently the Queen’s National Scholar in Indigenous Literature at Queen’s University in Kingston. He lives in Kingston, Ontario.

"In a series of poems the contradictory elements of Grey Owl's personality can be related with a deftness and lightness which prose might not have been able to capture." - -

"A powerful evocation of Canada's most famous fake. In a virtuoso orchestration of poetry, fiction, reminiscence, letter, news report, Armand Ruffo captures the contradictions of this ne'er-do-well who recreated himself out of his own impossible romantic childhood dreams." —Rudy Wiebe