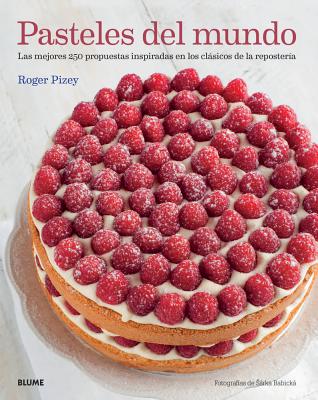 Pasteles del mundo is a fabulous collection of globally-inspired cakes, from national favorites such as American Boston cream pie and British Chelsea buns to exquisite small treats including Russian Tea Cakes and French madeleines. Each recipe has been meticulously researched and perfectly baked by Roger Pizey, one of the world's leading pastry chefs. Whether you are a baking novice wanting to make your first plum madeira or a seasoned pastry enthusiast wishing to impress with a millefeuille and a croquembouche, the book is divided into chapters that correspond with types of cakes and techniques. A handy go-to recipe section covers all the Baking Basics.

Roger Pizey is a celebrated baker and pâtissier with over 25 years’ experience at the cutting edge of cooking. Roger developed his craft in some of the finest restaurants in London, including a period as Head Chef of the highly regarded Criterion Restaurant, before founding the bakery for Peyton & Byrne. Roger has appeared on television in Hell's Kitchen alongside Marco Pierre White. As well as contributing to several of Marco's cookbooks, Roger is the author of his own highly acclaimed baking book, Small Cakes. He is currently Executive Head Chef of the Marco Restaurant in London.