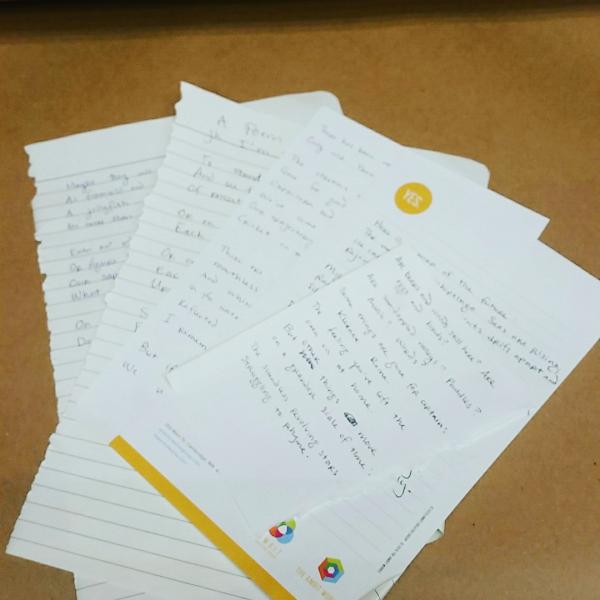 In what is sure to be the biggest poetry chapbook of the holiday season, here are all the poems written for #PoemMonday. These were all written by PSB booksellers, especially for the individual orders. Some of them, connect directly to the books that were ordered, while others...drift...a bit from the source material. Enjoy.

A Different Kind of Cold
As it drifted through space
momentum without friction
more darkness than light
more distance than place
more mass than gravity
the probe discovered an observation within itself
that its instruments were not prepared to analyze:
This cold is different from the cold in Norway.

Partial Inventory
Are bears and woods still here? Are eggs and birds?
Are sun-dappled valleys? Puddles? Music? Words?
Some things are gone for certain: Kleenex. Rome.
The feeling you've left the oven on at home.
But other things move on a grander scale of time:
The soundless revolving stars Struggling to rhyme.

A Map of the Future
Here is a map of the future
The world is an archipelago. Seas are rising
Ice caps melt, the continents drift apart and
Rejoin Atlantis

This is all a million years from now,
Or ten. Or twenty. No one on Earth
Will see this.

So then, perhaps, we're lucky.
For us, the ocean came early.

A Closer Target
The target we focus on feels
so far beyond our reach
that too often we don't even throw,
while at each pause in our effort
the tide pulls us further from the shore.
There is always a closer
target right on the tip
of your nose
under your shirt
at your feet to start with.

The Lines on the Notebook
In trying to write it all down
everything seen, heard, heard about, done, imagined, feared and denied,
everything thought or dreamed
by anyone thinking and dreaming
on this planet Earth
the letters had to be so small and so crammed together
that they became solid black lines
along the white surface
of our potential and where we attempted
to create a record
instead there was a fresh page
of lined notebook paper
waiting for whatever we would think of next.

The Last Mile
There never seemed to be the time
but we wrote letters any way.
If not every day, then certainly every week.
It wasn't so much what we said
or how we said it.
About the course of our days since we last talked.
But about that moment
when I knew my letter to you
was just one mile away.

Jazz Pun
Hey man,
how long did you have chase down
that solo for
before you brought that beat back
to the one gone note?
Miles, man.
Miles and Miles and Miles.

The Feather Cloud
The air is denser
than air usually is
with power and protest keeping the feathers
of the migrating flocks
in the air so long
they become clouds
waiting for the right kind front
--hot or cold--
to rain.

If Yeats Were an Aliebn
There has been no change in the forecast
Only cold, then colder

The streams are silver in the loam. The trout
Gone for good
Capricorn and cancer on a collision course.
We've come untethered, we are wanderers,
Our trajectory smeared across the sky like a
Cricket on a windshield

There are so many unseen eyes. there are so many mouthless whispers
And whisperless mouths. There are lights in the water
Reflected now in the flat void beyond.
I remember waiting for summer to come--

But if it must snow we will build snowmen.

Little fires all the way down
so you can burn as bright
as you please.

Addendum to Stopping By Woods on a Snowy Evening
Those miles went by a lot faster than I expected
so that finding myself
before my bed
and the contract made with myself fulfilled
there is a sense of miles still
between the door to the bedroom and the bed
between where I'm standing and the bed
between the night stand and the bed
and it feels like there are
more miles more and more miles
before I can sleep.
Even though the work is never done enough
work is done for today.

Do They Want Peace?
Maybe they will be weightless, clear
As formless and unthinking as
A jellyfish. Maybe they'll fear
Us more than we fear them. Who has

Even an inkling what strange form
Or figure life could take beyond
Our sapphire skies and thunderstorms?
What monstrous beings had nature spawned

On other worlds? Do they want peace?
Do they love bouncy castles and trees??

A Crisis of Modernity
Eliot woke up one morning
and discovered he had transformed into a pair of ragged claws
scuttling across the floors of silent seas
as he had forced J. Alfred Prufrock
to consider in his love song.

After a moment accommodating himself
to his new stature
he realized being a pair of claws
was both not really all that bad considering
and far, far worse than
he could have ever imagined.

Or on a Spring night, to behold
Each star revolving in its sphere

Or on a winter evening, hear
Each snowflake as it comes to rest
Upon a frozen mountain's crest--

Someday I'll do all this and more.
But for today, each distant shore
Is closer than my bedroom door
On ink and paper wings I'll soar.

The Absent Mountain
On their migration south
from Canada to Mexico
while crossing Lake Superior monarch butterflies,
clearly in no hurry,
swing East, adding miles and miles
to their already long journey.
This detour was caused by a mountain
that has long since fallen into the lake.
A mountain, that now exists to us
Only as the part of Lake
over which monarchs will not fly.

The Note Wendy Left Taped to the Motorcycle's Gas Tank
Thanks for the ride,
and the sodas and snacks along the way.
I'll pay you back
just as soon as I've finished
taking over the world.

Take Me To Your Leader
Every day, once a day,
she forgot everything she ever knew,
every name,
every instruction,
every flavor.

The Unwritten Anthology Inspired by Hieronymus Bosch
It was never a project meant to be finished
but still she thought there was some value
in writing a short story about every person
in The Garden of Earthly Delights.

Short Ode to a Cyborg
When I said you really touched a nerve
I didn't mean wire me to your
central processing unit.
But now that my nerves have been wired
to your central processing unit
it's not as bad as I expected.
Through these rogue receptors
the smooth jazz playing in the background
is even tolerable.

The Dinner Party
Interviewers always ask that question
What famous writer living or dead would you have a dinner party?
As if that were somehow impossible
as if you couldn't just stack up their books
on the table
peek at them while you finish the risotto
and dine with the best
their minds already
offered to the world.

Etymology of Cacophony
Sometimes it's easy to trace the meaning of words.
"Cacophony" for example
just combines the Greek "kakos"
which means "bad"
and the Greek "phone"
which means "sound."

As easy as it is to think of our cacophonous world
as filled with "bad sounds,"
it's even more fun to imagine
how a toddler might use this information
and shout
when your phone buzzes another series of notifications from our noisy, noisy world,
"It's the kaka-phone again!"