Porter Square Books is delighted to welcome recent debut authors Lisa Stringfellow and T. M. Blanchet for an event at PSB: Boston Edition! This event will be free and open to all- registrations are requested but not required.

Read more about the authors and their debut novels, A Comb of Wishes and Herrick's End below! 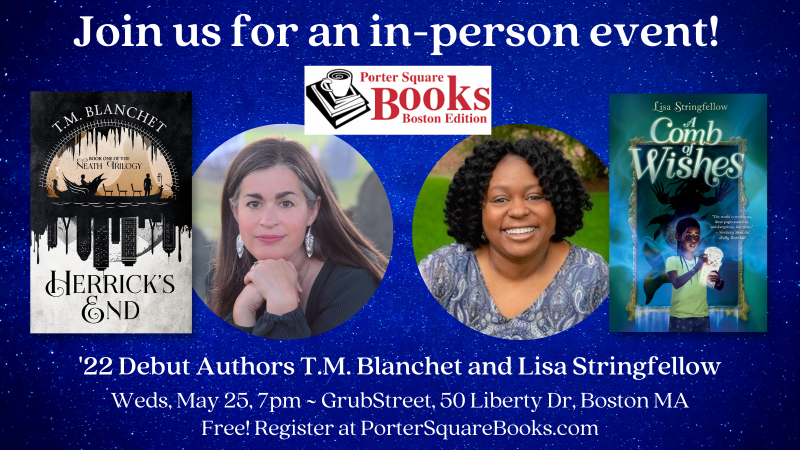 A Comb of Wishes

Ever since her mother’s death, Kela feels every bit as broken as the shards of glass, known as “mermaid’s tears,” that sparkle on the Caribbean beaches of St. Rita. So when Kela and her friend Lissy stumble across an ancient-looking comb in a coral cave, with all she’s already lost, Kela can’t help but bring home her very own found treasure.

Far away, deep in the cold ocean, the mermaid Ophidia can feel that her comb has been taken. And despite her hatred of all humans, her magic requires that she make a bargain: the comb in exchange for a wish.

But what Kela wants most is for her mother to be alive. And a wish that big will exact an even bigger price…

Don’t miss the novel that Newbery-winning author Kelly Barnhill calls “one of the most promising works of fiction in a long time”!

Lisa Stringfellow writes middle grade fiction and has a not-so-secret fondness for fantasy with a dark twist. Her debut fantasy A Comb of Wishes is published by HarperCollins/Quill Tree Books and was released on February 8, 2022. It was selected as an ABA Indie Introduce title for Winter/Spring 2022 and an Indie Next Kids' title for March/April 2022, and the book is listed on The Horn Book 2022 Summer Reading Recommendations list. Lisa received the inaugural Kweli Color of Children’s Literature Manuscript Award in 2019 for the novel manuscript. Her work often reflects her West Indian and Black southern heritage. Lisa is a middle school teacher and lives in Boston, Massachusetts, with her children and two bossy cats.

"You did nothing. You were nothing. And so, you shall remain here, until the end of your days. As nothing."

Ollie's only friend disappeared a few days ago, and now, he's frantic to find her. But he doesn't have much to go on until a mysterious note arrives, which reads:

"Still looking for your friend? I know where she is."

Unfortunately for Ollie, the trail leads to the last place he'd ever expect.

The kind of place where magic spills like blood, vengeance is merciless, and escape seems all but impossible.

Now, time is running out.

If Ollie has any hope of ever seeing home again, he's going to have to summon every last scrap of courage, smarts, and tenacity he can find. And none of it will matter if he can't get some help. Fast.

Because Ollie might not know much about the vast underworld that's ensnared him, but he does know this:

He'll never make it out alone.

T.M. Blanchet is a former reporter, editor, and award-winning humor columnist, as well as the founder of Operation Delta Dog, a nonprofit organization that rescues shelter dogs and trains them to work as service dogs for disabled veterans (OperationDeltaDog.org). T.M. is also a producer at A Mighty Blaze, an initiative designed to help authors and bookstores reach readers during the Covid-19 crisis (AMightyBlaze.com), and the producer and host of A Mighty Blaze Podcast. Herrick's End is her debut novel. Herrick's Lie, Book 2 of The Neath Trilogy, is due out from Tiny Fox Press in March, 2023.

-Proof of vaccination must be shown upon arrival at the event (a vaccination card, online vaccination record, or photo of your vaccine card are all fine - please have this handy, as well as a form of ID, as we check you in).

A Comb of Wishes (Hardcover)