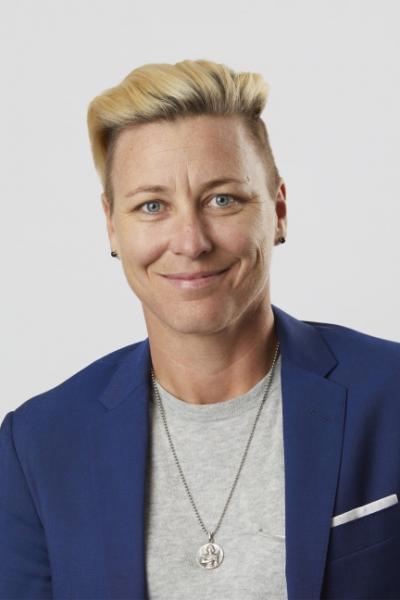 THIS EVENT IS SOLD OUT.

This event takes place at Somerville Theater, and tickets are required. (Tickets come with a copy of the book.)

Abby Wambach became a champion because of her incredible talent as a soccer player. She became an icon because of her remarkable wisdom as a leader. As the co-captain of the 2015 Women’s World Cup Champion Team, she created a culture not just of excellence, but of honor, commitment, resilience, and sisterhood. She helped transform a group of individual women into one of the most successful, powerful and united Wolfpacks of all time.

In her retirement, Abby’s ready to do the same for her new team: All Women Everywhere.

ABBY WAMBACH is a two-time Olympic gold medalist, FIFA World Cup Champion, and the highest all-time international goal scorer for male and female soccer players. She is an activist for equality and inclusion and the New York Times bestselling author of Forward: A Memoir. Abby is co-founder of Wolfpack Endeavor, which is revolutionizing leadership development for women in the workplace and beyond through her champion mindset, individualized coaching, and team-bound focus. Abby lives in Florida with her wife and three children.

Proceeds from ticket sales will be donated to the Porter Square Books Foundation. Porter Square Books Foundation was created in 2014 with a mission of fostering a love of reading and of books, particularly among children and families in our local communities whose access to them may be limited by economic or cultural factors.  Our primary means of achieving this goal has been through facilitating interactions between children and authors, and by donating books to children and families.

THIS EVENT IS SOLD OUT.

WOLFPACK: How to Come Together, Unleash Our Power, and Change the Game (Hardcover)