Porter Square Books is thrilled to partner with Hachette Book Group for a virtual event in celebration of the first of Daniel Abraham's new fantasy trilogy, The Age of Ash (The Kithamar Trilogy #1)! Daniel will be joined in conversation by Ty Franck, the other author behind the Expanse series. This event will take place on Tuesday, February 22 at 8:00 PM ET on Crowdcast. Register below to receive a Crowdcast link to join the event and a copy of Age of Ash! 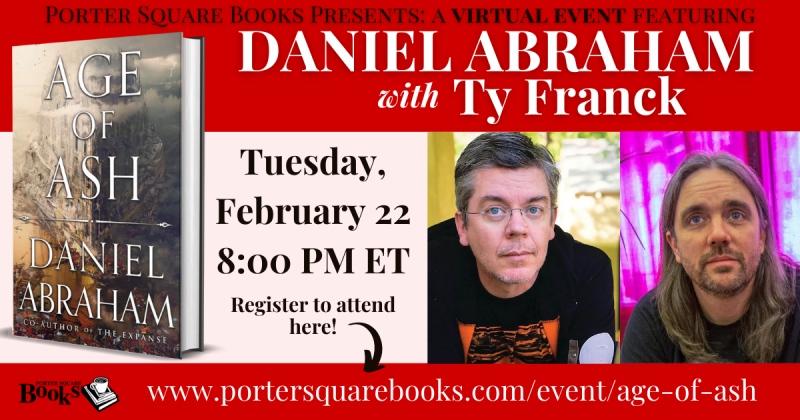 From New York Times bestselling and critically acclaimed author Daniel Abraham, co-author of The Expanse, comes a monumental epic fantasy trilogy that unfolds within the walls of a single great city, over the course of one tumultuous year, where every story matters, and the fate of the city is woven from them all.

Kithamar is a center of trade and wealth, an ancient city with a long, bloody history where countless thousands live and their stories unfold.

When her brother is murdered, a petty thief from the slums of Longhill sets out to discover who killed him and why.  But the more she discovers about him, the more she learns about herself, and the truths she finds are more dangerous than knives.

Swept up in an intrigue as deep as the roots of Kithamar, where the secrets of the lowest born can sometimes topple thrones, the story Alys chooses will have the power to change everything.

Daniel Abraham is the author of the critically-acclaimed Long Price Quartet and The Dagger and the Coinseries. He has been nominated for the Nebula and World Fantasy awards, and won the Hugo award and International Horror Guild award. He also writes as James S. A. Corey (with Ty Franck) and MLN Hanover. He lives in New Mexico.