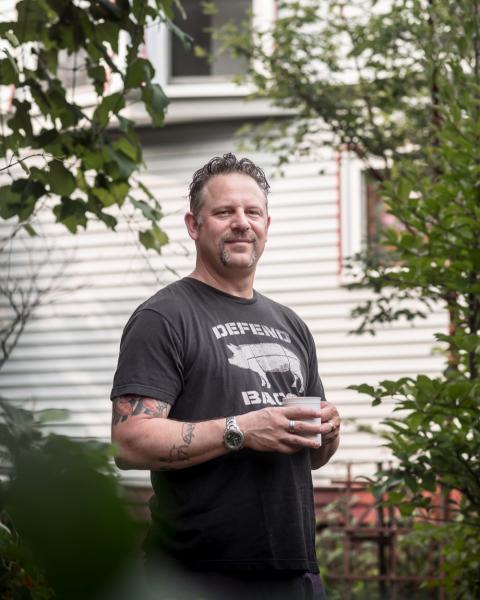 Join Andy Husbands and Will Salazar as they share their secrets in The Smoke Shop's Backyard BBQ. Start off with a classic Backyard Barbecue featuring pulled pork, Twice-Smoked Pulled Chicken, deliciously simple brisket, and New Memphis Ribs. With a selection of the Smoke Shop’s favorite sides, drinks, and desserts, it might seem like all you ever needed. Then they go further afield, as the following chapters bring smokehouse flavor to every occasion:

Additional chapters include The Big Brunch, a Fancy Party, and even a Holiday Party to keep the BBQ going year round. Gather your friends and family: it's time for a BBQ-filled celebration!

Andy Husbands is an award-winning pitmaster who began developing his own unique style of cooking upon opening Boston’s Tremont 647 in 1996 and later, Sister Sorel. His latest culinary venture, The Smoke Shop, culminates Husbands’ continued success and pays homage to his extensive background in the competitive barbecue circuit. His honest, approachable fare makes Smoke Shop the "Best Barbecue Restaurant" according to Boston Magazine, and the restaurant has been praised in The Boston Globe, Wine Spectator, Star Chefs, and more.

After nearly three decades in the restaurant industry, Husbands serves as one of Boston's most celebrated culinary leaders and foremost authority on regional Barbecue and live-fire cooking. He competed on the sixth season of FOX Television Network’s fiery Hell’s Kitchen and is internationally-recognized for his BBQ team, IQUE BBQ, who became the first New England team to win the World Champions of BBQ title in 2009 at the Jack Daniels World Championship in Tennessee. Husbands is a large contributor to Share Our Strength as well as an active board member of the Massachusetts Restaurant Association, who acknowledged him as the 2014 Chef of the Year and a Rodman Celebration Restaurant Chair. He has also co-authored several cookbooks, including Pitmaster, Wicked Good BBQ, Wicked Good Burgers, Grill to Perfection,and The Fearless Chef.

The Smoke Shop's Backyard BBQ: Eat, Drink, and Party Like a Pitmaster (Hardcover)