Porter Square Books is delighted to present local author James Bird for a virtual event in celebration of his new book, The Second Chance of Benjamin Waterfalls. Nic Stone, #1 New york Times bestselling author of Dear Martin, will join the author in conversation. This event will be free and open to all, taking place virtually via Crowdcast on Tuesday, April 19th at 7pm ET. 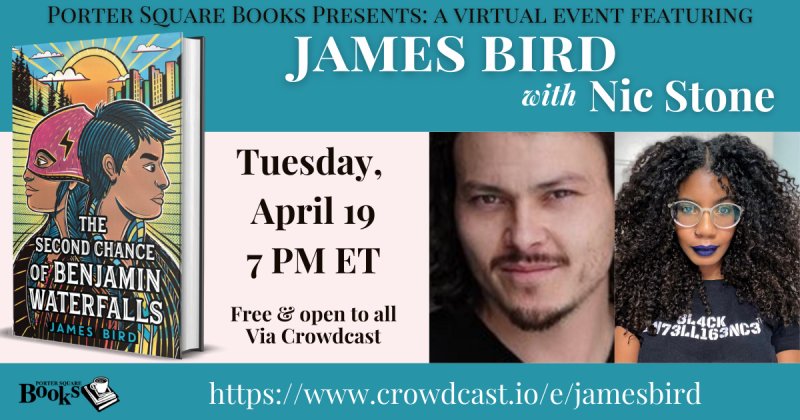 Register for the Crowdcast here!

A middle-grade novel by James Bird about a boy sent to his Ojibwe family to straighten out his life.

Benjamin Waterfalls comes from a broken home, and the quickest fix he’s found for his life is to fill that emptiness with stuff he steals and then sells. But he’s been caught one too many times, and when he appears before a tough judge, his mother proposes sending him to “boot camp” at the Ojibwe reservation where they used to live.

Soon he is on his way to Grand Portage, Minnesota, to live with his father – the man Benny hasn’t seen in years. Not only is “boot camp” not what he expects, but his rehabilitation seems to be in the hands of the tribal leader’s daughter, who wears a mask. Why? Finding the answer to this and so many other questions prove tougher than any military-style boot camp. Will answers be enough for Benny to turn his life around and embrace his second chance?

James Bird is a screenwriter and director at the independent film company, Zombot Pictures; his films include We Are Boats and Honeyglue. A California native of Ojibwe descent, he now lives in Swampscott, Massachusetts with his wife, the author and actor Adriana Mather, and their son. The Brave is his debut novel.

Nic Stone is the #1 New York Times bestselling author of Dear Martin, the novel that launched her career in 2017 and encourages readers of all ages to examine the biases in their own lives and to have honest discussions about race in today’s world. Nic’s mission is to create books and stories that speak to kids underrepresented in YA literature today—and her aim is to not only create windows in which young people are introduced to new perspectives but also mirrors in which children see their experiences and identities fully represented. Born and raised in a suburb of Atlanta, GA, Nic grew up with a wide range of cultures, religions, and backgrounds, and constantly strives to bring diverse voices and stories to her work. All of her novels have been widely embraced by teens and adults and have been the recipients of numerous accolades, awards and starred reviews. In addition to Dear Martin, her books include Dear Justyce, Blackout and middle-grade novel, Clean Getaway, all New York Times bestsellers, Odd One Out, Jackpot, the Shuri series as well as Fast Pitch. A Spelman College graduate, Nic lives in Atlanta withher family. Find her online at nicstone.info or @nicstone.