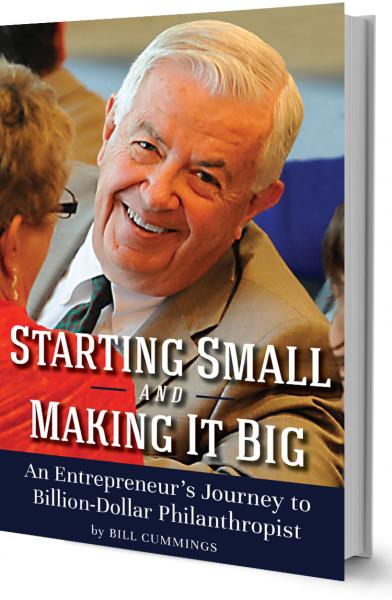 Bill Cummings never aspired to be a billionaire—and never acknowledged he was one until long after it happened. That’s because it is not money that motivates him, but rather the immense enjoyment he gets from building and growing successful businesses. He thrives at being an opportunist and believes that this often-misunderstood trait is one of the key characteristics of successful entrepreneurs. They see opportunities where others overlook them. And they act swiftly to adopt them before someone else does.

Although perhaps not intentionally, Bill’s parents encouraged his entrepreneurial nature by instilling in him the desire to "get ahead" and to become "somebody." His father painted houses, raising a family in a one-bedroom apartment atop a liquor store and a taxi stand on the outskirts of Boston. Bill’s mother was a neighborhood fixture, building friendships as she knocked on doors to collect coins for large charities that once operated that way.

From his parents, Bill learned the value of hard work, kindness, and fiscal responsibility. Year-round he washed windows for his neighborhood’s storekeepers, and for three summers as a young teen he sold ice cream from the back of his bike at a nearby Ford Motors assembly plant. Later he purchased and sold dozens of small boats using Boston Globe classified ads. Eventually, he built a 500-person firm near Boston with a debt-free portfolio of 11 million square feet of commercial real estate.

This fascinating self-written autobiography shares not only how he got there, but also his singular dedication to giving back to the communities and institutions so vital to his success. In Massachusetts alone, the cash donations from Cummings entities to local charities already total more than $240 million.

Through Bill’s unique voice, readers experience his achievements and adventures—including a stint at Fort Dix with Ralph Nader and, much later, meeting and working regularly with some of the world’s greatest philanthropists—as well as his setbacks and personal tragedies during the seven-decade story.

For anyone studying business, building a business, or running a business, Bill’s journey also offers keen insights, cautionary observations, and the pioneering thinking that produced great prosperity and a multibillion-dollar enterprise. For everyone else, it offers a new and engrossing twist on the classic American success story.