Porter Square Books: Boston Edition and Mass Poetry are delighted to present an evening of poetry on Monday, September 26 at 7pm! Hear from Michael Ansara, author of What Remains, of which Januarry Gill O'Neill wrote, "Language lifts off the pages of these poems that celebrate a rich, full life, filled with family, nature, love, and loss." We'll also be joined by Quintin Collins, author of the Journal CBWheeler prize winning collection Claim Tickets for Stolen People, and Jennifer Martelli, author of the "tenacious" poetry collection Queen of Queens. All three collections will be available for purchase at the event.

Masks are required for all in attendance. RSVPs, while not required, are strongly recommended! 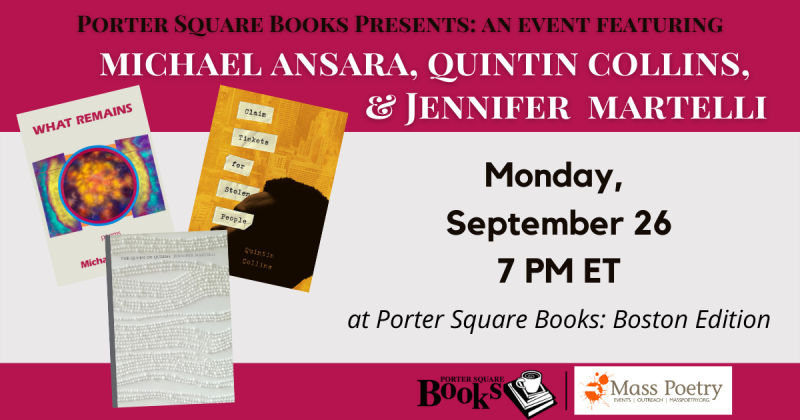 Michael Ansara is the founder of the Massachusetts Poetry Festival. His first book of poems, “What Remains”, was published by Kelsay Books in 2022. Michael spent many years as an activist and an organizer starting with the civil rights movement of the 1960’s, going on to be a regional organizer for SDS. He spent 10 years organizing opposition to the war in Vietnam. For 15 years, Michael worked as a community organizer including directing Mass Fair Share. He has worked on political campaigns, coordinated voter registration efforts, and trained many organizers. He owned and ran two successful businesses. He currently serves on the Executive Committee of the Redress Movement and the organizing team for Together We Elect.  His poems have appeared in numerous journals and his essays have appeared in Vox, Arrowsmith, Solstice and Cognoscenti. He is currently working on a memoir. He lives in Carlisle, MA, with his wife Barbara Arnold and dotes on his three children and six grandchildren.

Quintin Collins (he/him) is a writer, editor, and assistant director of the Solstice Low-Residency Master of Fine Arts in Creative Writing Program. His work appears in many print and online publications, such as Sidereal Magazine, Superstition Review, Glass: A Journal of Poetry, Solstice Literary Magazine, and others. Winner of a Pushcart Prize and the 2019 Atlantis Award from the Poet's Billow, Quintin's publishing accolades include multiple Best of the Net Nominations, and he was a finalist for the 2020 Redivider Beacon Street Prize.

Quintin's first full-length collection of poems, The Dandelion Speaks of Survival, which was a finalist for the Alice James Award, is available from Cherry Castle Publishing. His second collection of poems, Claim Tickets for Stolen People, selected by Marcus Jackson as winner of The Journal's 2020 Charles B. Wheeler Poetry Prize, is available from Ohio State University Press/Mad Creek Books.

Prior to Quintin's current professional role, he spent nearly six years in the digital marketing field as a writer, section editor, and managing editor. He also wrote a series of articles about the ways marketers can leverage writing craft in digital media for a previous employer's company blog.

Jennifer Martelli (she, her, hers) is the author of The Queen of Queens (Bordighera Press) and My Tarantella (Bordighera Press), awarded an Honorable Mention from the Italian-American Studies Association, selected as a “Must Read” by the Massachusetts Center for the Book, and named as a finalist for the Housatonic Book Award. She is also the author of the chapbooks In the Year of Ferraro from Nixes Mate Press and After Bird, winner of the Grey Book Press open reading. Her work has appeared in The Academy of American Poets Poem-a-Day, Poetry, The Tahoma Literary Review, The Sycamore Review, Cream City Review, Verse Daily, Iron Horse Review (winner of the Photo Finish contest), and elsewhere. Jennifer Martelli has twice received grants from the Massachusetts Cultural Council for her poetry. She is co-poetry editor for Mom Egg Review.

ISBN: 9781599541808
Availability: Available to Order from Supplier: Arrives at Store in a Week(ish)
Because of how it is sold to us we cannot accept a return of this title.
Published: Bordighera Press - April 12th, 2022