Presented by Porter Square Books in partnership with the American Inspiration series and the Wyner Family Jewish Heritage Center of NEHGS, Mass Poetry, and GrubStreet. 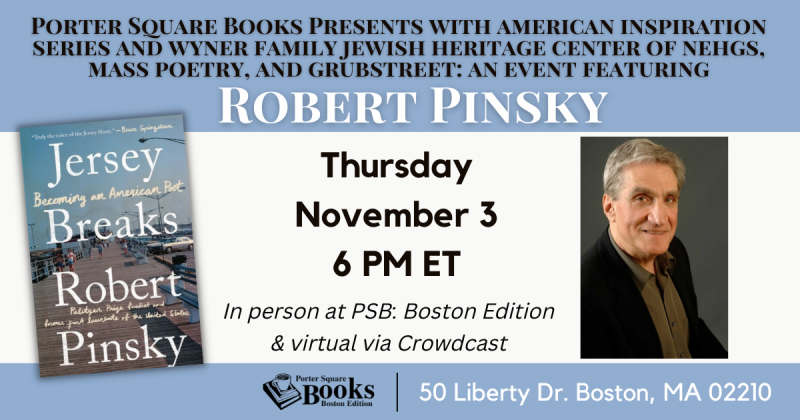 The best-loved poet, celebrated critic, translator, and teacher, shares his coming-of-age story: a lyrical and poignant portrait of America in the last century, its melting pot, and one man’s against-many-odds rise to literary success.

In late-1940s Long Branch, a historic but run-down Jersey Shore resort town, in a neighborhood of Italian, Black, and Jewish families, Robert Pinsky began his unlikely journey to becoming a poet. Descended from a bootlegger grandfather, an athletic father, and a rebellious tomboy mother, Pinsky traces the roots of his poetry back to the voices of his neighborhood, to music and a distinctly American tradition of improvisation, with influences including Mark Twain and Ray Charles, Marianne Moore and Mel Brooks, Emily Dickinson and Orthodox Jewish liturgy. Candid, engaging, and wry, Jersey Breaks  offers an intimate self-portrait and a unique poetic understanding of American culture.

Robert Pinsky is the author of numerous books of poetry, including the Pulitzer Prize finalist The Figured Wheel, and prose, including The Sounds of Poetry. He served as United States Poet Laureate from 1997 to 2000, during which time he founded the Favorite Poem Project. He has edited several anthologies, most recently The Book of Poetry for Hard Times. He teaches at Boston University and lives in Cambridge, Massachusetts.

Register to attend in-person at the webform below!

If you plan to attend virtually via Crowdcast, you can register at this link: https://www.crowdcast.io/e/jerseybreaks!