BOSTON: Terry Brooks with R. A. Salvatore, Daughter of Darkness

Porter Square Books: Boston Edition is delighted to welcome prolific fantasy author Terry Brooks for Daughter of Darkness, the follow-up to Child of Light! NY Times Bestselling author R. A. Salvatore will join the author in conversation, and a signing line will follow the talk.

This event will take place on Monday, October 3 at 7pm at Porter Square Books: Boston Edition (50 Liberty Dr. Boston, MA 02210). Masks and RSVPs are both required- you can RSVP below! 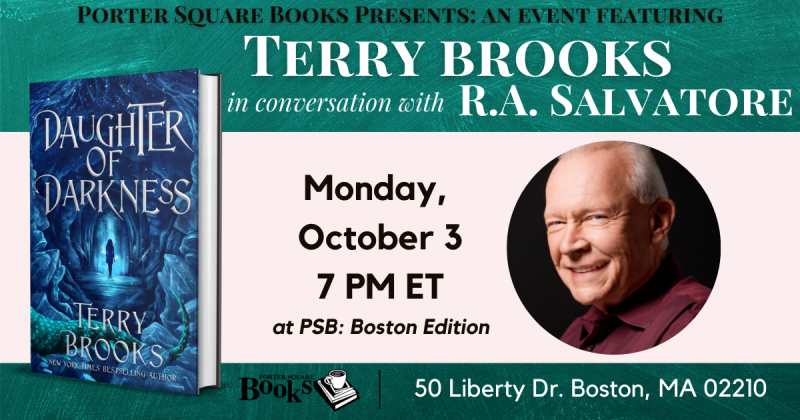 The thrilling second novel of an all-new fantasy series from the legendary author behind the Shannara saga, about a human girl adapting to her place in a magical world she’s only recently discovered

It’s been two years since Auris escaped from the sinister Goblin prison and learned of her heritage as one of the Fae. She is now happily partnered with her Fae lover, Harrow, and deeply bonded with her new family. All seems to be going perfectly—until, surprisingly, the Goblin attacks begin again. Someone, it seems, has not forgotten that Auris exists and seems determined to retrieve her . . . but who? And why?

As Auris begins to dig deeper into the mystery, old friends and new enemies appear, and she starts to realize that her still-shrouded past must contain the answers she needs. But even Auris does not suspect how far down the rabbit hole she is about to go, until Harrow is taken and an impossible ransom demand is issued. With two new companions at her side, Auris must attempt to unlock the remaining secrets of her past. For if she cannot, she will never see Harrow alive again.

TERRY BROOKS has thrilled readers for decades with his powers of imagination and storytelling. He is the author of more than thirty books, most of which have been New York Times bestsellers. His Shannara series has sold more than 50 million copies worldwide, making it one of the most popular fantasy epics of all time. The first book in the series, The Sword of Shannara, was published in 1977.  It took Terry seven years to write the book, and it was an instant hit, remaining on the New York Times bestseller list for five months. In 2021, Terry introduced a brand new fantasy series with Child of Light. The second book in the series, Daughter of Darkness, will release in October 2022. Terry Brooks lives with his wife, Judine, in the Pacific Northwest.