Brice Matthieussent, Revenge of the Translator 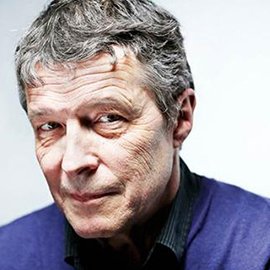 Renowned French writer and translator Brice Matthieussent reads from his debut novel Revenge of the Translator, in conversation with his own translator Emma Ramadan.

Revenge of the Translator follows Trad, who is translating a mysterious author’s book, Translator’s Revenge, from English to French. The book opens as a series of footnotes from Trad as he justifies changes he makes. As the novel progresses, Trad begins to take over the writing, methodically breaking down the work of the original writer and changing the course of the text. The lines between reality and fiction start to blur as Trad’s world overlaps with the characters in Translator’s Revenge, who seem to grow more and more independent of Trad’s increasingly deranged struggle to control the plot. Revenge of the Translator is a brilliant, rule-defying exploration of literature, the act of writing and translating, and the often complicated relationship between authors and their translators.

Brice Matthieussent is an award-winning translator of over 200 novels from English into French, including the writings of Jim Harrison, for which he was awarded the 2013 Prix Jules Janin from the Académie française. In 2000, he was awarded the UNESCO-Françoise Gallimard Prize for his translation of Robert McLiam Wilson’s Eureka Street. His other translations include the works of Jack Kerouac, Henry Miller, Annie Dillard, Rudolph Wurlitzer, and Charles Bukowski. He graduated from the École nationale supérieure Mines de Paris in 1973, and earned his PhD in philosophy in 1977. Matthieussent currently resides in France, where he teaches the history of contemporary art and aesthetics at the Ecole Supérieure des Beaux-Arts in Marseille. Revenge of the Translator is his first novel, and was awarded the Prix du style Cultura upon publication in France in 2009.

Emma Ramadan is a literary translator based in Providence, RI where she is the co-owner of Riffraff bookstore and bar. She is the recipient of a PEN/Heim grant, an NEA translation grant, and a Fulbright fellowship for her translation work.

“At once a powerful satire and an ode to a collaborative art form, this delightful novel will have readers scratching their heads, retracing their steps, and delighting anew in the art of translation, including Ramadan’s own skillful work here.” — Publishers Weekly

Revenge of the Translator (Paperback)