Porter Square Books is thrilled to welcome Ben McGrath for his debut, Riverman: An American Odyssey, the recipient of starred reviews in both Kirkus and Booklist. Says best-selling author Emma Straub, "This book will make you want to buy a canoe and spend less time on Instagram.” Financial Times contributing editor Brendan Greeley will join the author in conversation. We hope you'll join us on May 23 at 7pm at Porter Square Books: Cambridge Edition for an author talk and signing!

RSVP's are recommended, but not required. Fill out the RSVP form below to let us know you're coming and to receive event updates! 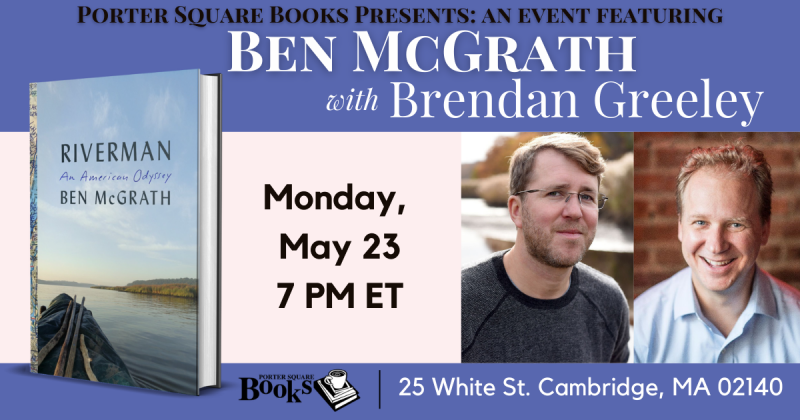 “This quietly profound book belongs on the shelf next to Jon Krakauer’s Into the Wild.” —The New York Times

The riveting true story of Dick Conant, an American folk hero who, over the course of more than twenty years, canoed solo thousands of miles of American rivers—and then disappeared near the Outer Banks of North Carolina. This book “contains everything: adventure, mystery, travelogue, and unforgettable characters” (David Grann, best-selling author of Killers of the Flower Moon).

For decades, Dick Conant paddled the rivers of America, covering the Mississippi, Yellowstone, Ohio, Hudson, as well as innumerable smaller tributaries. These solo excursions were epic feats of planning, perseverance, and physical courage. At the same time, Conant collected people wherever he went, creating a vast network of friends and acquaintances who would forever remember this brilliant and charming man even after a single meeting.

Ben McGrath, a staff writer at The New Yorker, was one of those people. In 2014 he met Conant by chance just north of New York City as Conant paddled down the Hudson, headed for Florida. McGrath wrote a widely read article about their encounter, and when Conant's canoe washed up a few months later, without any sign of his body, McGrath set out to find the people whose lives Conant had touched--to capture a remarkable life lived far outside the staid confines of modern existence.

Riverman is a moving portrait of a complex and fascinating man who was as troubled as he was charismatic, who struggled with mental illness and self-doubt, and was ultimately unable to fashion a stable life for himself; who traveled alone and yet thrived on connection and brought countless people together in his wake. It is also a portrait of an America we rarely see: a nation of unconventional characters, small river towns, and long-forgotten waterways.

BEN McGRATH is a longtime staff writer for The New Yorker. He lives outside New York City in a small town on the Hudson, with his wife and two children. This is his first book.

BRENDAN GREELEY is a contributing editor at the Financial Times, where he writes about the Federal Reserve and -- when they let him -- boats. He is also currently a PhD student in the history of finance at Princeton University. Brendan has worked as a staff and features writer for the Financial Times, Bloomberg Businessweek and The Economist, covering monetary policy, technology and -- when they let him -- boats. His work has also appeared in The New York Times and The New York Times Magazine. He lives in Annapolis, MD with his wife, four children and a dog that was briefly famous on the internet.