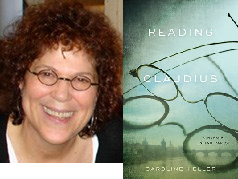 1930’s Prague, its cafés and its fierce intellectual and literary culture make the backdrop of Part I of Caroline Heller’s Reading Claudius: A Memoir in Two Parts. Heller vividly evokes the early lives of her mother, father, uncle, and their circle of close friends, who were at the center of the pre-war European literary milieu that was irrevocably destroyed by WWII. As Hitler's power grew, Heller’s family and friends were forced to flee the country and watch the world and culture they treasured vanish forever. Captured at the border, Heller's father was imprisoned in Buchenwald for six years. His powerful and poignant letters to Heller's mother and uncle from inside the concentration camp – unlike anything you’ve ever read – form the centerpiece of this gripping memoir.

Unable to know her parents’ and uncle’s early world in its fullness, Heller took to writing about them in an attempt to approximate the depth of their lives. Doing so was her way of fulfilling a life-long yearning to literally make her parents’ world whole again, to bring back that dense mingling of the intellectual, the artistic, the social, and the political that defined their early lives—their lost Atlantis of pre-war central Europe and the horror of the encroaching Nazi regime.

The second half of Reading Claudius begins at Heller’s birth, and follows her childhood and coming of age. Restless and insecure, Caroline carries the trauma of her parents’ story with her, but her quest to make peace with her heritage is eased by the love of books and writers, part of her family legacy. Through the darkest years of Hitler’s rule, Caroline’s parents and uncle turned time and time again to literature to help them survive—and so she does as well.

Written with sensitivity and grace, Reading Claudius is a profound meditation on the ways we strive to solve the mysteries of our pasts, and a window for anyone who longs to understand the ones they love.

Caroline Heller is the director of the interdisciplinary Ph.D. program in Educational Studies at Lesley University, where she is also a professor in the graduate school of education. She lives in Boston with her family.