Caroline Linden, Love in the Time of Scandal 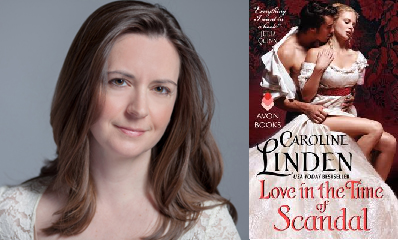 USA Today-bestselling author Caroline Linden's third novel in her Scandalous series brings together a feisty heiress, a notorious rake, and a shocking book that could bring one woman the utmost despair-- or the greatest pleasure

Penelope Weston does not like Benedict Lennox, Lord Atherton. He may be the suave and charming heir to an earl, as well as the most handsome man on earth, but she can't forget how he abandoned a friend in need-- nor how he once courted her sister, Abigail. He's the last man she would ever marry. If only she didn't feel so attracted to the arrogant scoundrel . . .

Once upon a time, Benedict thought he and Penelope got along rather well. Though he needs a wealthy bride to escape his cruel father's control, spirited Penelope just doesn't suit his plans for a model marriage--until a good deed goes awry, and scandalous rumors link his name to Penelope's. She might not be the quiet, sensible wife he thought he wanted, but she is beautiful . . . beguiling . . . and far more passionate than he ever imagined. Can a marriage begun in scandal become a love match, too?

Caroline Linden was born a reader, not a writer. She earned a math degree from Harvard University and wrote computer software before turning to writing fiction. Twelve years, sixteen books, three Red Sox championships, and one dog later, she has never been happier with her decision. Her books have won the NEC Reader's Choice Beanpot Award, the Daphne du Maurier Award, the NJRW Golden Leaf Award, and RWA's RITA(R) Award. Since she never won any prizes in math, she takes this as a sign that her decision was also a smart one.

Love in the Time of Scandal (Mass Market)